RT America has been stripped of its Congress credentials as the US State Department confirms that it will not change RT’s FARA status.

RT reports that the US Congress has withdrawn RT America’s accreditation on Capitol Hill, citing the company’s “foreign agent” status. That’s hours after the State Department said the US Foreign Agents Registration Act “does not restrict an organization’s ability to operate.”

On Wednesday, RT America received a letter from the Congress, informing it of the decision, which was taken last week.

“The Executive Committee of the Congress Radio & Television Correspondents’ Galleries exercised its authority, as garnered by the rules of House of Senate, to withdraw the news credentials of the RT Network by unanimous vote on November 21, 2017.” 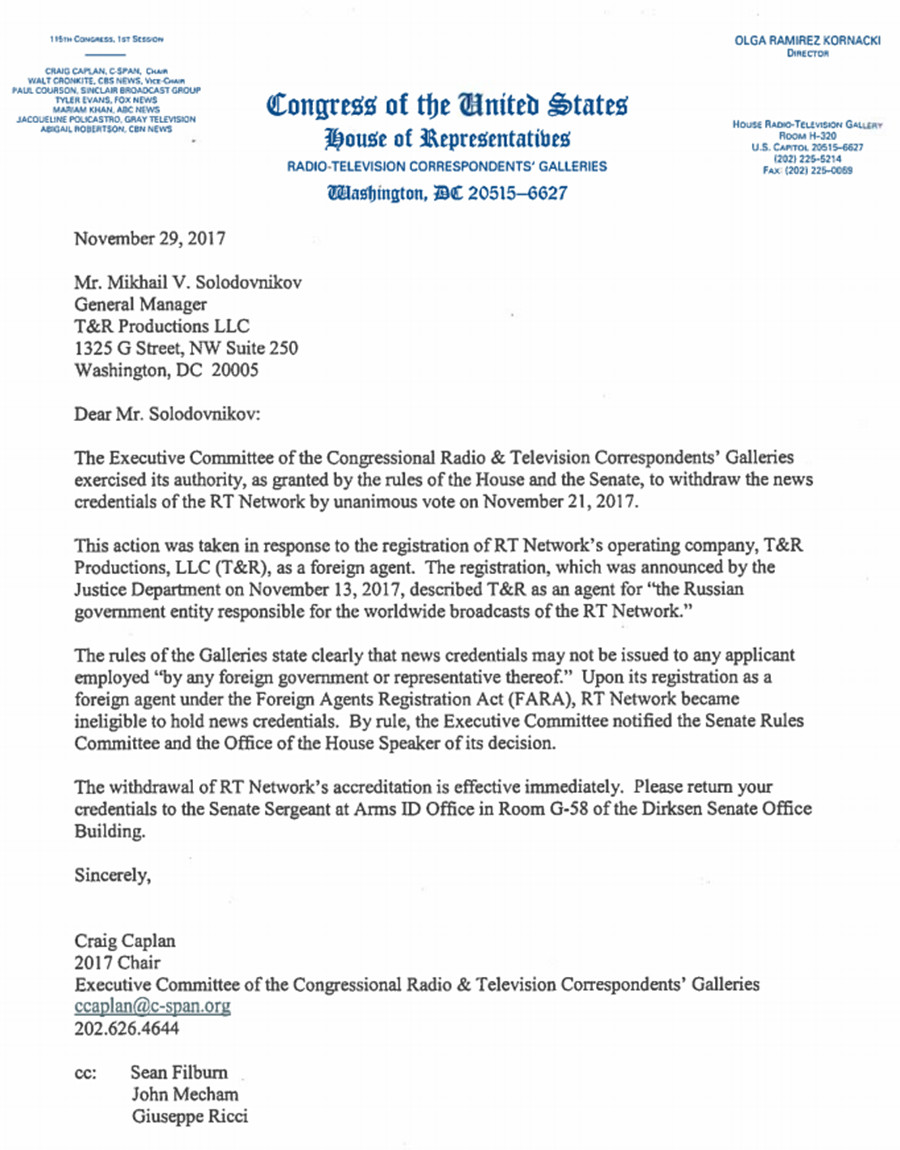 Unfortunately this is just the beginning of the US government’s squeezing of RT America, and its legal status to broadcast in the US, its employees, and its financial operations.

RT America was notified that the move follows registration of its operating company as a foreign agent earlier in November.

“The rules of the Galleries state clearly that news credentials may not be issued to any applicant employed ‘by any foreign government or representative thereof.’ Upon its registration as a foreign agent under the Foreign Agents Registration Act (FARA), RT Network became ineligible to hold news credentials,” the letter said.

The withdrawal of RT’s accreditation in the Congress was effective immediately, said the letter, which was signed by the Galleries chair. The broadcaster is instructed to return its credentials to the Senate Sergeant.

The move goes against Washington’s statements that the registration as a foreign agent was more of a formality, which won’t affect the broadcaster’s operation in the US.

“FARA does not police the content of information disseminated, does not limit the publication of information or advocacy materials, and does not restrict an organization’s ability to operate,” Heather Nauert, US State Department spokeswoman, said Tuesday.

In another comment in October, Nauert also insisted that “when the United States tells someone to register under a foreign agent requirement, we don’t impact or affect the ability of them to report news and information. We just have them register. It’s as simple as that.”

RT’s editor-in-chief, Margarita Simonyan, has slammed stripping RT America of Congressional credentials, saying: “To all the self-righteous defenders of ‘freedom of speech’ who oh-so-ardently proclaimed that FARA registration places no restrictions whatsoever on RT’s journalistic work in the US: Withdrawal of Congressional credentials speaks much louder than empty platitudes.

“[And] to borrow from Orwell, all “foreign agents” are equal, but looks like only RT is denied congressional accreditation on the basis of FARA status, while the likes of NHK and China People’s Daily carry on business as usual, and US officials continue to claim that the forced FARA registration for RT America’s operating company isn’t at all discriminatory.”