When asked by reporters if he was planning to attack North Korea after the latest weapons test in which the North Korean regime claimed to have successfully tested a hydrogen bomb, US President Donald Trump simply stated, “We’ll see”.

Trump had just finished speaking with a priest outside St. John’s Episcopal Church near the White House Sunday morning where he attended a service for the National Day of Prayer for those affected by Hurricane Harvey when he was asked about North Korea.

The reporter, John T Bennett with CQ Roll Call said, “Mr. President, will you attack North Korea. With First Lady Melania standing with him, Trump nodded his head, said, “We’ll see. Thank you”, gave a wave of his right hand and walked to the waiting motorcade without saying anything further.

USAdistia is led by THE moron. USAdistia has nuclear weapons. What can possibly go wrong.

N.K has called the Dump’s bluff twice already and continues to make a mockery of the buffoon and his fascist regime. Dump wont do a shit if not because he would love to have L.A nuked so because Russia and China will make sure of that.All options but negotiations on equal terms is off the table for the US.

I agree. Cucks talk, men act. The longer no war happens, Kim wins. It’s shocking how brazenly stupid the US foreign policy gambit truly is by talking so tough, when it was always a bluff. In poker, you only lose money. In war, you die. I’m waiting for the false flag on Guam by the United States to blame NK/China as a 21st century Pearl Harbor. It’s the ONLY possible false flag target, since SO MANY people in the US are now awake and looking for the gov’t to target it’s own people and fake a casus belli for another… Read more »

“Dear world, don’t worry, millions of Patriots of the US are watching their treasonous govt and they know it. We all here in the US are TIRED of unending wars and understand they are for multinational corporations, or as “war is a racket” reasons.”

I will believe that when I see HUGE protests against Trump’s foreign policy/war-making from those who voted for him! The world awaits your ACTIONS

Protests are meaningless. They infiltrate provocateurs, and then open up on men, women and children in baby carriages.

Vets don’t make themselves known, if they are gonna act. I have lost everything, so I just don’t care anymore. If someone comes to suicide me, I’ll serve them coffee and thank them for the end of my suffering.

You know the Charlottesville psyop was held in CIA headquarters backyard? It is a moderately long drive (140miles) from Langley Air force Base straight down I-64?

I hope it’s true, even as I have talked to members of anonymous, anonymously and through channels I didn’t expect to be contacted, I can’t be wonder how gov’ts couldn’t use such a ruse to do their won bidding. Anonymous say they are too numerous to stop. I hope they aren’t just our own intelligence agencies playing house. Psychopaths unless dirt napped never stop. There’s this lady that killed 4 of her husbands IN A ROW and when she finally got arrested and prosecuted (given the police are as sharp as a wet noodle on a rainy day) was always… Read more »

This week they are starting mass arrests of the cabal…FROM THE BOTTOM UP..so ROTHSCHILDS will be last. Inside info from this morning… what is really going on…think before you judge me!! Weather Wars In geometria……Houston…BUSH IRMA…..DONALD TRUMP…2 days before Hurricane Harvey,he bought 17 million of insurance …Trump and the P2 Freemasons(Vatican) have underground Gold off NYC Underground Vaults of GOLD in NORTH KOREA,stored by CHINA NASA is making the hurricanes by sending 1 million degrees of heat into a COLD SYSTEM TRUMP IS UNDER HOUSE ARREST..Dunford(( half Annunaki ) is the Boss and the military is inside the White House.… Read more »

The video suggests that Kim Jong-Un has been mind-controlled by the CIA. The purpose of Kim Jong-Un is (1) to help the US Empire to weaken the economies of South Korea, Japan and China, and (2) to help the US military-industrial-complex. Major defense stocks surge to all-time highs “KIM GETS $3 BILLION FROM USA” According to Tom Heneghan’s Intelligence Briefing’s Blog, in 2013, Kim Jong-un has received a lot of money from the USA. “It can now be reported that a P140 U.S. aircraft cargo plane left Langley, Virginia at 3:30 p.m. EST destination North Korea. “The aircraft contains $3… Read more »

Google is paying 97$ per hour! Work for few hours and have longer with friends & family!!!
On tuesday I got a great new Land Rover Range Rover from having earned $8752 this last four weeks.. Its the most-financialy rewarding I’ve had.. It sounds unbelievable but you wont forgive yourself if you don’t check it
>>>http://GoogleFinancialJobsCash370TopOne/GetPay$97/Hour….

South Korea doesn’t want US to open a new war with the North, as THEY would be the first victims. Never forget that Seoul, 10 million inhabitants , is located some 30 km South from the 38th parallel border. Attacking NK, would mean sacrifying the South. For more than 60 years, the US tried with sanctions to isolate NK, to cut it down, to starve it. Now, N.K have nothing to lose, except their own life and others’. After its partition, the two artificial Koreas were occupied by Soviet Union and United States. The Russian troops left NK in the… Read more »

In other words, NO.

The North is betting that its nuclear weapons programs will be valuable bargaining chits in future negotiations with the United States. The North has no plan to nuke the west coast of the United States. That’s ridiculous! That doesn’t accomplish anything. What they want is to preserve their regime, procure security guarantees from Washington, lift the embargo, normalize relations with the South, extricate the US from the political affairs of the peninsula, and (hopefully) end the irritating and endlessly provocative 64 year US occupation. Yankee go home. Please. Bottom line: The North is ready to deal. They want negotiations. They… Read more »

Trump doesn’t have a clue what he’s doing. He’s busy 24/7 evading subversion from the deep state and the new staff members who are mostly former generals out for more war. 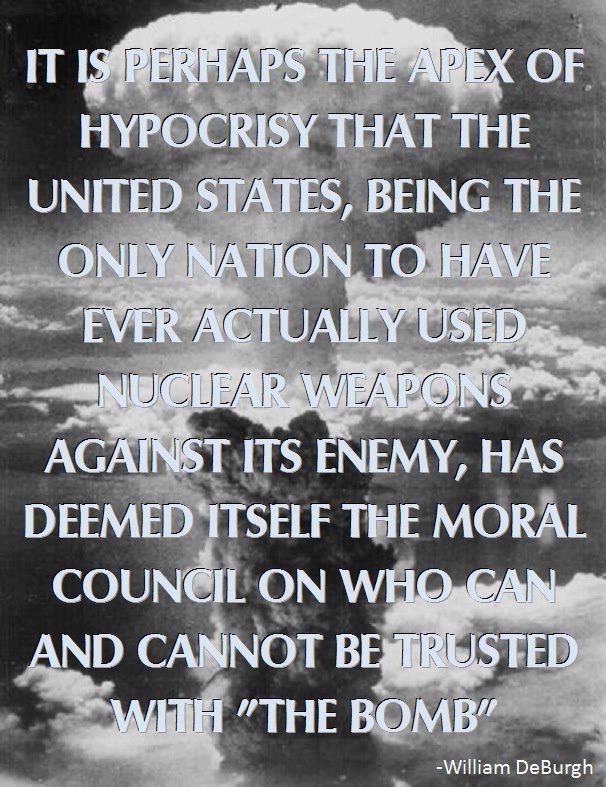