Expats got the message, which is why Greece and Ukraine place at the bottom 10 “least favorite places” for expats to live.

Australia saw the largest drop in the rankings, sliding from tenth most expat-friendly country to a 34 ranking.

“Greece was at the very bottom of the list, weighed down by the country’s economic problems. Australia, which ranked in the top 10 last year, dropped more than any other country, to 34th place. Expats’ ratings of jobs, career prospects, work hours and work-life balance all dropped.” 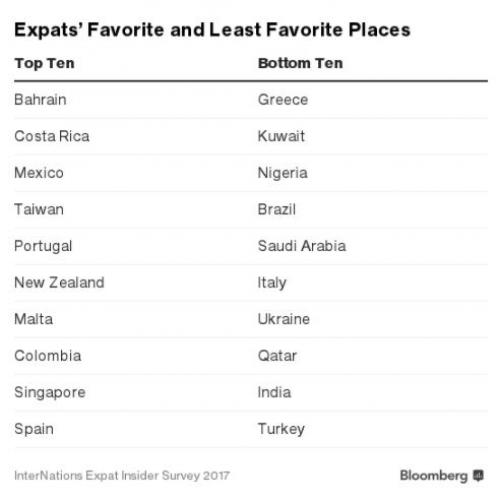 Zerohedge reports that the internationalist class of workers who populate urban centers like New York City and London – and who have the most to lose from nationalist economic and immigration policies – now perceive the US and Britain as less friendly to foreigners, not to mention less politically stable, according to a survey of 13,000 expatriates of 166 nationalities that was cited by Bloomberg.

The respondents said that quality of life in both countries is declining by other measures, including the affordability of child care and health care. However, we don’t think one can easily blame that on the election.

The UK ranks 54, down 21 places from last year’s survey, after its June 2016 vote to leave the European Union. Before the referendum, 77 percent of expats had a favorable opinion of the nation’s political stability. That’s down to 47 percent this year.  The survey was conducted in February and March, before the most recent British election. Just half of expats say the UK has a good attitude toward foreign residents, compared to 67 percent.

Expats in Britain have also soured on its economy. The weak pound and higher inflation put the UK 59th for personal finance. Almost two-thirds of its expats have an unfavorable opinion of its cost of living, with 69 percent unhappy with the affordability of housing. Three out of five expats also don’t appreciate the weather in the UK.

The US has seen a commensurate decline in public opinion. Just 36 percent of expats have a positive view of America’s political stability, down from 68 percent in last year’s survey. Overall, it ranks 43 of 65, down 17 places from last year.

Overall, the U.S. is ranked 43rd of 65 contenders, 17 places lower than last year. But its reputation was already falling before the election results came in. As recently as 2014’s survey, the US was No. 5. One bright spot is that 69 percent of expats have a favorable view of the American economy.

Some 72 percent of expats in the US say health care is unaffordable; the world’s largest economy ranks 50 by measures of health and well-being. Its transportation infrastructure was rated “very good” by just 15 percent of the expats, less than half of the global average. Meanwhile, the US ranks last for affordability of child care and 39 out of 45 countries ranked for education affordability. 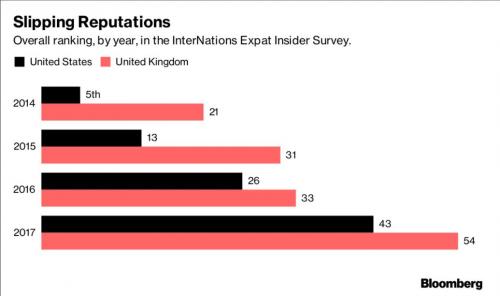 The top-ranked country in 2017 was Bahrain.

“The top-ranked country in 2017 is Bahrain, given high marks by its expats as a place to work and raise a family and for making foreigners feel welcome. It vastly outranks Persian Gulf neighbors such as Kuwait, Saudi Arabia and Qatar, which ranked in the bottom 10 of the 65 countries in the survey.” 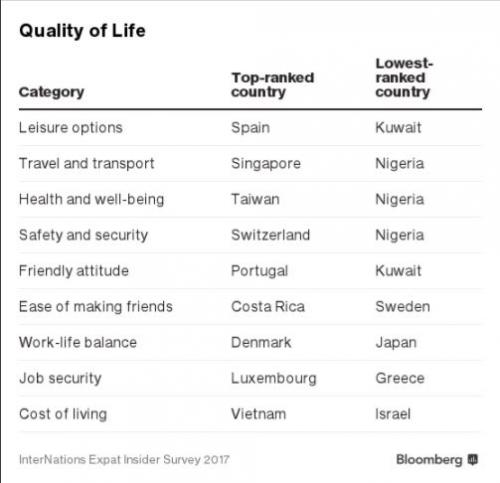 China ranked as one of the expats’ favorite places,

Two-thirds of respondents said they were happy with their careers, though the country ranked 55 out of 65 for overall quality of life.

Taiwan, which topped last year’s list, slipped to fourth place, while Singapore climbed into the top 10. Hong Kong languished at 39, up from 44 last year.

The survey was conducted by InterNations, a Munich-based network of 2.8 million expats. The survey includes interviews with executives, skilled workers, students and retirees who live outside the country where they grew up. There are about 50 million expats worldwide, according to market research by Finaccord, and the number is expected to hit 60 million over the next five years.

This article is preposterous! It begins with this quote:

That’s not what Bloomberg and Zerohedge wrote. Seriously. Reinterpreting the original articles like this lacks journalistic integrity to the max! I hope the Duran won’t use this method of journalism as their new standard.

OK, I see what you’re saying, Vladimir, although my own interpretation of the lines you quote were that this statement was Alex Christoforou’s own description of what happened to those two countries, which are named in his headline? Zerohedge and Bloomberg aren’t mentioned until after this paragraph, so, maybe his line of argument moved onto information from these two articles?

I’ll go and read the Zerohedge…

THIS article refers to this article.meaning AC’s article here on the Duran. He shouldn’t reinterpret the bloomberg report in this manner. It’s very unprofessional and reveals his reactionary side instead of his journalist side.