US President Donald Trump threatened to break with NATO and conduct American security unilaterally if the allies did not immediately increase their military spending targets, according to NATO officials and diplomats.

One NATO official said Trump wants a plan from alliance members by January on how to reach the spending target.

The US president made the statement when asked if he had threatened to pull out of the historically anti-Russia alliance, and whether he thought he could do so without first consulting Congress.

Trump ignored the first question, but on the second question, he said, “I think I can.”

According to Politico, Trump warned his allies behind closed doors that they would need to radically increase defense spending or the US “will do our own thing.” NATO Secretary-General Jens Stoltenberg then reportedly shifted the meeting to an allies-only emergency session, requiring European Commission President Jean-Claude Juncker to leave the room.

As Trump threatens to pull out of the military alliance,  a new poll shows that Germans would actually be in favor of an American troop withdrawal from their country, which has been present since the end of the Second World War.

The finding comes on the first day of a NATO summit in which the US president is urging Europe to spend more on defence if it wants to continue to receive American military protection.

But far from being seen as a threat, a YouGov poll for the dpa news agency found that more Germans would welcome the departure of the 35,000-strong American force than would oppose it.

42 per cent said they supported withdrawal while just 37 per cent wanted the soldiers to stay, with 21 per cent undecided.

Last month the US media reported that the US government was in the process of assessing the cost of keeping troops in Germany ahead of a possible withdrawal, citing Pentagon sources.

But the policy of actually pulling out of the country has not actually reached the negotiating table in his week’s Brussels summit and is not expected to be discussed as a possibility – for now.

The cause of US withdrawal enjoys significant support from across the political spectrum in Germany but is particularly strong with the supporters of certain parties.

Voters for the left-wing Die Linke are particularly in favour of withdrawal, with 67 per cent backing it, as are supporters of the far-right AfD, on 55 per cent. Greens also back withdrawal by 48 per cent.

Less supportive of withdrawal are voters for the centre-right CDU, at 35 per cent, the SPD at 42 per cent, and the FDP at 37 per cent.

The same poll also found significant opposition to militarism in general in the country. Just 15 per cent of all Germans agree with Angela Merkel that the country should increase its military spending to 2 per cent of GDP by 2024, with 36 per cent saying the country’s already spends too much on its military.

Who the hell wants a militarized Germany AGAIN?

LOL. The Germans’ revenge against Trump outrageous declarations concerning them:
‘Heute’ – a news program TV channel ZDF – published photos of Trump during his trip to the UK, but with the president replaced with the baby Trump balloon 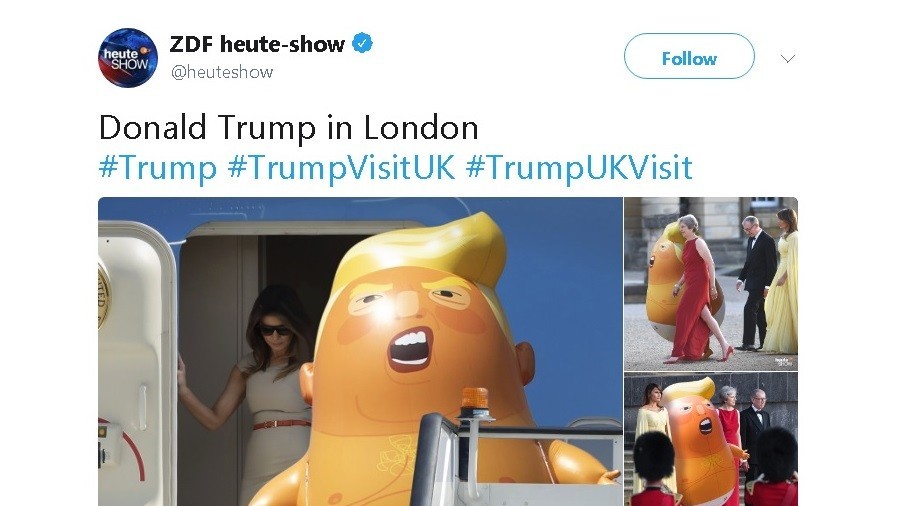 AND WHO CREATED NATO?????? What Globalists say; what they really mean Jul12 What Globalists say; what they really mean By Jon Rappoport “[The] nation state as a fundamental unit of man’s organized life has ceased to be the principal creative force. International banks and multinational corporations are acting and planning in terms that are far in advance of the political concepts of the nation state.” (Zbigniew Brzezinski, 1969) This famous quote from one of the world’s leading Globalists could have been written more truthfully. For example: “We must do everything we can to eliminate the reality of separate and individual… Read more »

‘Auf wiedersehen, Americanish!!’ Germany has no need whatsoever for NATO. The Deutsch are more than capable of providing for their own defense needs, and would have no problem working with other European nations to arrange regional defense coverage.

The complete elimination of NATO is the best thing that could happen for a peaceful road ahead.Tough $hit for the arms industries .Re-orient the funds to needed infrastructure repairs and construction of same in the countries that were signed on to this now useless war mongering entity.

What happens to the US Mk. 41 missile launcher base in Deveselu, ROM and the brand new as yet unopened one in Redzikowo, POL?

Simple as this European and all other so called Nato Countries and if he pulls out – tough sh1t. Nato is obsolete and a joke, used by the US to enhance their global hematology (spelling!!, sorry).

Dump the US and the World can work together again.

The fine print says buy LNG from qatar, or else the Syrian war ends…..