Just when Trump seemed to have moved past the Charlottesville controversy…52 year old (ex-Goldman Sachs), Mnuchin’s wife got into it on Instagram with a user who took issue with one of her ill-thought out Instagram posts…

Apparently @jennimiller29 didn’t appreciate Linton hastagging her entire expensive wardrobe (including #rolandmouret, #tomford, #hermesscarf, and #valnetinorockstudheels) while traveling on a taxpayer funded private plane, during her husband’s trip to “check” if the gold at Fort Knox is still there, which prompted the following snarky comment:

“Glad we could pay for your little getaway.”

Feeling as if she had to reply to the social media trolling, Linton dug herself into a very deep hole with this terrible, PR disaster reply…which will surely make many Americans on the left hate Goldman Sachs a bit more, hedge fund managers much more, and Donald Trump exponentially more…

“Cute! Aw!!! Did you think this was a personal trip?! Adorable! Do you think the US govt paid for our honeymoon or personal travel?! Lololol. Have you given more to the economy than me and my husband? Either as an individual earner in taxes OR in self sacrifice to your country? I’m pretty sure we paid more taxes toward our day ‘trip’ than you did. Pretty sure the amount we sacrifice per year is a lot more than you’d be willing to sacrifice if the choice was yours. You’re adorably out of touch. Thanks for the passive aggressive nasty comment. Your kids look very cute. Your life looks cute. I know you’re mad but deep down you’re really nice and so am I. Sending me passive aggressive Instagram comments isn’t going to make life feel better. Maybe a nice message [sic], one filled with wisdom and hunanity [sic] would get more traction. Have a pleasant evening. Go chill out and watch the new game of thrones. It’s fab!”

Zerohedge notes that at one point during the evening, someone even went so far as to change Linton’s Wikipedia page to reflect her IG comment. “Never forget she posted this on Instagram,” the page read as of 10:30 p.m.

Alas, in the end, it seems that only the President is permitted to post outlandish social media rants as Linton’s post has since been deleted and her account turned private.

Replying to this Instagram reply was a very stupid move on the part of Linton.

Posting the initial Instagram post was equally, if not more stupid…and twitter users proceeded to make Linton, and in extension President Trump, pay the price for such foolish actions…

Trump’s bigotry won’t be the reason for @stevenmnuchin1‘s resignation. It will be @LouiseLinton‘s elitism and poor shaming. #LetThemEatCake https://t.co/HSnrkzw4y1

Confused about what “vapid, out of touch cuntery” looks like? Here it is. #LouiseLinton is just a trophy wife. #Mnuchin didn’t buy American pic.twitter.com/9HubtGx7vK

Treasury Secretary’s Wife Louise Linton, Shame On You If You Don’t Own Hermes https://t.co/EwDzPZ2Pgd

@LouiseLinton you belong on the Vegas Strip! You ah gold digger, you know dam well you married that man for his money. Who you fooling? ???????????? https://t.co/XYZkwco1OA

Blonde bombshell Louise Linton had a guest role in Robert Redford’s Lion fro Lambs, then followed it up with leading roles in Banking on Love and Wiffler: The Ted Whitfield Story.

Why do women today all have this egotistical, narcissistic trait to play act that they are Hollywood starlets ala Marilyn Monroe on social media outlets?!?

Media and Hollywood Conditioning on how to “behave”

And then they say that those jokes about blond are jokes ;-).

And they are not as near good looking as ours ;-).

In the US perhaps maybe they mostly are … but in the relatively unspoilt regions of the world they are not jokes — they are for real.

A bit confused…
Are you saying that ussa blondes have brains?!?

No matter the shade of a woman’s hair or to what nation she’s born– real women thank God, are still found all over the world– for them, the love and care of their families come first and they’re not concerned whether others consider them brainy or not…. Thank God too, there are still real guys in our troubled world, putting their families first and are exemplary husbands and fathers.

She IS a “Hollywood starlet” – or more precisely a Scottish actress… 🙂

Hey matey– be fair. Far from it, most women are ordinary hard working souls who love and live for their husbands and children.

It’s only the trash who do that.

Well, we do know in the meantime who runs Hollywood, don’t we?

So they could tweet detailed pics of her outfit…..but NOT ONE of all the ‘gold’ they went to see?

Unless….? I’m thinking what you’re thinking.

Designer clothes cannot buy class. She is inherently classless and very obviously not very bright. Doesnt say much for her husband.

So what? The rich are the rich because they like being rich–they get some kind of pleasure out of flaunting it but that’s normal and I see it all the time with cars, houses, vacation homes, clothes. Find your favorite rich people watering hole and go see. Our culture worships the rich and thus the rich feel justified in their lifestyles–why shouldn’t they be? We always need to be reminded that we are ruled by an aristocracy and I think the woman is doing just that and I think it’s great, I always enjoy being reminded.

Her money is her god, one day she’ll find out that God can’t be bought. Until then she’s a private citizen and she should be left alone.

Looks like she belongs in an escort service. Trashy clothing…WOW, speaks book volumes about Mnuchin.

Don’t you love the way he just gloats so charmingly? You would think that he doesn’t owe a thing to Kamala Harris, our next Barack Obama.

I think Amazia has a lot more to worry about, waste their thought processes on, than this tacky piece of non information.
Why is the world so hung up on tits, rectums, all soon to be dust, when there are a lot more confronting issues we need consider?
Is this just a continuation of the old epitaph of Rome burning whilst Nero fiddled?

Mnuchin is likely a yiddish variant of Menachem. The Odessa Mafia flows in Goldman Sucks’s (gold) veins. Vulgarity does not cover it. ‘Cuntery’ is closer. And I refer to him… she is just a cheap ho.
So this is what draining the swamp looks like.
Lock and load Americans. Lock and load.

I think he bought her on E Bay….

At least America’s First Trollop (Melania) has the decency to keep her mouth shut, as does Donny’s #2 wife, Ivanka.

They and Mnuchin’s expensive little toy are all the same, though – arm/bed candy that would vanish in a moment in the absence of $$$.

They all have the taste/behavior of trailer park denizens who have just won the Mega Million Lottery. 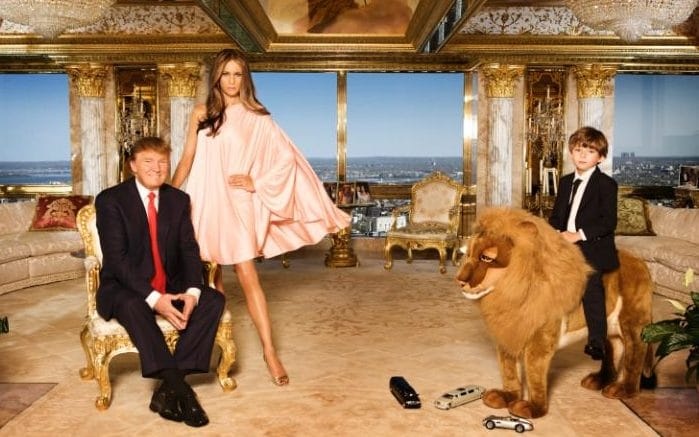 Here’s Steve telling Jeff what he does with Louise.

ROTFLMFAO!! That’s cute. Haven’t seen much of you on MPN since the format change.

1st time I saw the format change, they wouldn’t let me get to the comments without taking a survey, so I just dumped it for a while.

But when I saw your “First Trollop”, I had to offer something in reciprocation.

That’s odd. I never got a survey. I did e-mail Mnar b!tching about the new format (she never answers). I don’t like it, but I’ll deal with it.

I complained about that too. It’s too gaudy. I said that it was nothing I had agreed to pay for, and stopped the subscription for a day.

Well, I’m sticking with MPN. I like what they publish and don’t want to see them go under. I do wish they’d go back to a more useful format, though.

Same here, I think that Mnar got conned.

When somebody shows you a nifty new page layout, it’s easy to fall for the idea. Common sens says to test out the new format first – before committing. It’s the easy, useful sites that have the traffic, like Duran, Ri, RT, etc.

Melania is anything but a trollop!– she’s a highly intelligent and charming woman and beautiful to boot, she’s an excellent mother. Yes, she had a good fling in her day– but most of us do when we’re young. But as Melania matured she gained depth — comes from a loving family too and whenever she speaks, she speaks sense. Best US First Lady in many a moon. I think Trump has plenty of good in him, but the cabal knows its now or never — decisions we see are not from him. The cabal is desperate and know its their… Read more »

Reading your comment, I’m amazed that you are bright enough to use a computer.

Washington has become not simply a swamp but a Khazar fake-jew Odessa Mafia swamp.

That is the view of the US-EU elite ruling class wherein 90% of all other people are relegated to being ‘deplorables’, as Hillary said in 2016.

She’s a private citizen, irregardless if her hubby makes his money via the govt., leave her alone.

All you can say is (classic parasite comments).
Just what I would expect to hear from such people!.

The braying Bolsheviks think they scored a Marie Antoinette victory with this. She pwned that twit.

This is why the US needs a real revolution.

Thanks for the Maxim link! Always ready to view hot blondes! LOL

Wind tunnel serves as a brain … not a grain of brain. Poor thing. What is it with these people! Have they no idea how the world mocks them– how they fill people with disgust to the point of vomiforia! Its just unbelievable.

At least America’s First Trollop has the decency to keep her mouth shut. But, the entire “administration” is like Duck Dynasty won the Mega Million lottery – all bling and no dignity.

Living in the UK, I may be speaking out of turn, BUT, in comparison to the tranny Michael/Michel whatever its name was, that the straight (supposed) pres Obami was dragging around!!! OMG.
And please, It goes without saying that we all detest Goldman Sachs and all who have sailed on that ship.

The lady protests too much. Indicates a guilty conscience, resulting from awareness that she is essentially a parasite.