Vladimir Putin and Barack Obama were never very friendly with one another, and respect between the current Russian President and former US president was little if none.

Under Obama, US-Russian relations hit an all time, dangerous low.

Vladimir Putin, always the statesman, preferred to refer to Obama and the US as “partners”, letting his actions speak louder than words.

In a summer downpour, Putin laid a wreath in eternal memory of the heroes of the most harrowing and deadly war in human history.

The image of Putin standing in the rain, no umbrella will become an instant classic, showcasing the man that Obama could never be, and for whom the former POTUS displayed a special kind of contempt and jealousy.

Actions speak louder than words…which President has your respect? 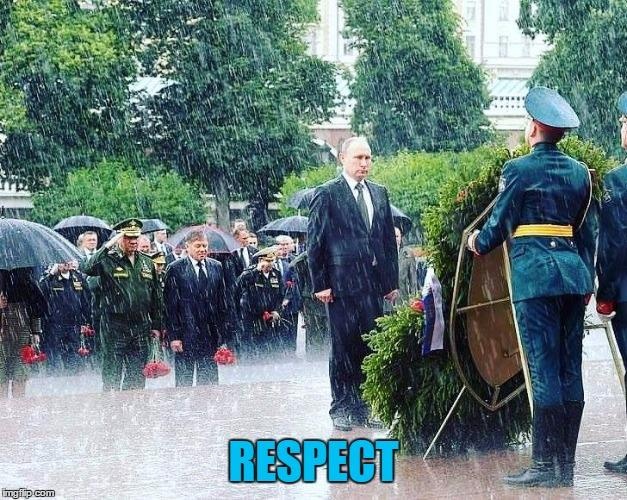 Putin and Obama are not even in the same category.
Putin is a beloved, masculine, knight-like, warrior, Obama was a homosexual, an embarrassment and made people cringe whenever he opened his mouth. Enough said.

President Putin .Much respect . A statesmen for the times.

Here stands a world-leader…rain or shine!!!

Which President has my respect? That’s not even a question!!! Mr. Putin, I salute you!!!