Yesterday The Duran reported that the Syrian Arab Army has broken the siege around Deir-ez-Zor according to top Syrian General Yarob Zahreddine.

As Zerohedge reports, against all odds the Syrian Army has broken the years-long ISIS siege of Deir Ezzor and is now poised to re-establish government control over Syria’s east. And for the first time since the start of the war, Middle East analysts are predicting that Assad will eventually consolidate control over much of the entire country.

ISIS have controlled and encircled the Syrian for three years. This marks the beginning of the end of terrorist control of the city that is now the largest single ISIS hotbed in the Middle East.

It will take time to fully liberate the heavily fortified city, but in breaking the ISIS encirclement of the city, Syria has scored a highly important strategic and symbolic victory.

This has now been confirmed by the Syrian government. Syrian forces continue to advance deeper into the remaining ISIS held parts of the city.

News of the Syrian Armies victory over US-Saudi backed ISIS jihadists was curiously left unreported in most mainstream media outlets. Syria’s victory on the battlefield is a massive slap to the face for America’s regime change “Assad must go” plan hatched six years ago.

As news of the successful Deir Ezzor campaign broke, liberated Syrians broke out in mass celebrations as Syria’s national football team delivered a stellar performance on the pitch…advancing into qualifier playoffs in an unprecedented bid for a World Cup 2018 entry, by holding Iran to a 2-2 draw. 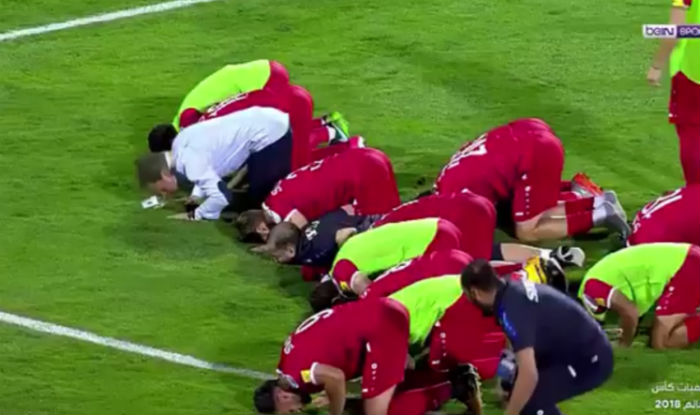 Syria participating in Russia’s 2018 World Cup. Irony and justice. We are pulling for Syria to qualify!

Syria on Tuesday held Iran to a 2-2 draw to keep their hopes of qualifying for World Cup for the first time alive. Thanks to Omar al-Somah’s equaliser in the last minute during the injury time, Syria made sure they stay in the contention.

After Omar al-Somah scored the most important goal, Syrian players celebrated like there is no tomorrow. However, more than Syrian players’ celebration it was the commentator who caught all the eye balls.

The commentator went with the flow as he described the action and eventually broke down in tears. Even though he was not commentating in English but one could feel the intensity and emotions he was running through.

“The second goal, the second! Pass! The second! GOAAALLLLLL! Allah!” Shouted the commentator.

With this draw, Syria sealed a playoff spot in 2018 World Cup qualifying. The team will now face Australia in the playoff.

Apparently the scorer, al-Somah, is from Deir ez-Zor. And he only very recently returned to the national team after boycotting it for years – perhaps due to sympathy with the ‘rebels’, or maybe because he plays in the Saudi league.
No wonder the commentator broke down into tears.

Ronaldo comes from a very poor large family………… you must just keep on dreaming, and it comes true, together with lopts of hard work and dedication……….. Best Wishes to Syria and their beautiful peope.

Totally agree.
These great people deserve all the luck in the world, and a good measure of help from their equally great Russian friends.