Before and after the Helsinki summit the internet was awash with searches related to “Trump” and “Treason”…even more so than when Trump joked in July 2016 about Russia having Hillary’s missing 30,000 emails.

The Duran’s Alex Christoforou and Editor-in-Chief Alexander Mercouris discuss the out of control ‘Russia did it’ narrative that is consuming mainstream media news and triggering the DC swamp…but to the working American, focusing on life’s everyday problems, Russia hysteria barely makes the list of “most important problems facing” America today.

According to Zerohedge, as with the Democrats’ unending focus on Russia and the media’s constant collusion chatter: few Americans care, because – drumroll – they have real lives in the real economy to worry about.

As the latest survey from Gallup shows: when asked what the most important problem facing the nation is, Russia did not even warrant a 1% – and worse still, it is declining in importance from there.

So with all that energy expended on pinning the Russia collusion tail on Trump’s campaign donkey, let alone former FBI Director Comey’s insistence that ‘anyone voting Republican is anti-American’, we are reminded of the blinkered view of the world so many suffer from and what Steve Bannon said yesterday at CNBC’s “Delivering Alpha” conference: The Democrats abandoned the American worker.

“The meddling was on the margin, and the Democrats need to accept this. The collusion – they haven’t found one shred of evidence.

The Democrats have yet to embrace why they lost…[they] have wanted a do-over since 2:30 am on Nov. 9 – and they’ve lied and they’ve bitched and in November they’ll get their do-over…but on November 6, the deplorables will be plenty jacked up.”

But in November, voters will render their decision, and whatever they decide it’ll be on Trump’s platform of economic nationalism, which has boosted economic growth and created jobs.

“It’s an up or down vote, the economy, the tax cuts the whole package. I think the Fed’s going to say in the second quarter it’s at 4%…because of economic nationalism.”

So, will The Left find policies to run on that are not “socialism”? and are not “not Trump”?

This can’t be so?, CNN tell us Russia is the number 1 issue in America…………LOL. 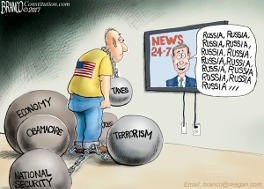 Hey The Duran, analyze this: The West is arguably considered loser of the Syrian War. Or is it colluding with Putin to put it on the back burner, humming for a couple decades until it finds another theater?

Deep State has become a general terminology, but its definition must be clarified to understand the nonpartisan Russian collusion hysteria against Trump. Deep State is the bureaucratic political system which blurs public who is responsible for policy decision and its consequence. There are numerous number of committees run by congressmen to make policy decisions look democratically righteous “procedure” but it is a cloak of invisibility of bureaucracy behind the policy making. Conflicts and coincidences in the interests will appear during the “procedures”, which are usual political fights. The political fights before Trump are more or less look like ”some win,… Read more »