“I think it’s going to continue to do exactly what it’s doing. It’s going higher and it’s going lower,” he said Tuesday on CNBC’s ‘Futures Now’.

“We can look at what’s happening now, which to me is a climactic end of QEs.”

CNBC reports that Pauls sees the cryptocurrency craze as a side effect of central banks doing several rounds of quantitative easing to cope with the last financial crisis.

“I look at the problems we face. I think they’re gigantic and people are desperate and looking everywhere. Why would they buy bonds that pay negative interest rates? Why would they buy stocks, and say well this time it’s different? ” asked Paul.

“Cryptocurrency is a reflection of the disaster of the monetary dollar system.”

The former Republican presidential candidate, argues that cryptocurrencies are in an “exponential bubble” where trying to calculate its real value is extremely difficult.

Bitcoin, the largest of the cryptocurrencies, had traded to almost $20,000 before crashing into the $12,000s overnight… 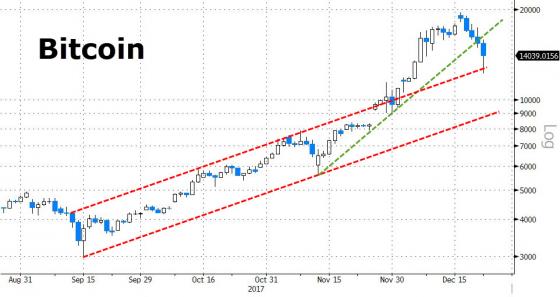 According to Zerohedge, Ron Paul has not been able to pinpoint when a plunge could happen in cryptocurrencies or the stock market. But Paul says the danger is real.

“They’re both big bubbles in the sense that it occurred because there was excessive credit. But if you look at the curves, I think that the cryptocurrency curve looks more threatening,” Paul said.