Not only does she refuse to go away, but former US presidential candidate, Hillary Clinton, is ready to contest the US election…should evidence finally present itself that Putin recruited Trump, purchased $100K in Facebook ads, and proceeded to paint the electoral college red.

In an interview with NPR, HRC said that “if Russian interference turned out to be deeper than previously thought” she wouldn’t rule out challenging its legitimacy or the outcome.

In a rare moment of sanity, Clinton did admit that she does not “believe” there is a means to officially challenge the election’s outcome.

“I don’t know if there’s any legal, constitutional way to do that.”

“There are scholars, academics, who have arguments that it would be [possible], but I don’t think they’re on strong ground. But people are making those arguments. I just don’t think we have a mechanism.”

“I think you can raise questions.”

Your sure can, especially if it means staying in the public eye day after day reminding the world how your loss was everyone else’s fault but your own, to the point where even her fellow Democrats have said enough. Monday’s interview is the latest in a whirlwind of appearances the former first lady has given as she promotes her book, “What Happened.”

In addition to Russia, over the past week, she’s continued to blame James Comey, Bernard Sanders and others for her defeat, and she’s also doubled down on her call to end the Electoral College.

None of this is new: Hillary has repeatedly blamed Russia’s efforts to intervene in last year’s election for her loss to Donald Trump, but her latest comments reflect the depth of her frustration with the Kremlin’s efforts which apparently were channeled by Trump himself. She charged that the president knew the Russians were trying to sabotage her campaign, but that it’s unclear if he can be held accountable at this point.

“[Trump] knew they were trying to do whatever they could to discredit me with emails, so there’s obviously a trail there, but I don’t know that in our system we have any means of doing that, but I just wanted to add to the point you made. There’s no doubt they influenced the election: We now know more about how they did that.”

Clinton also said she would have reacted differently than Trump did and established an “independent commission with subpoena power” to probe it.

“Let me just put it this way, if I had lost the popular vote but won the electoral college and in my first day as president the intelligence community came to me and said, ‘The Russians influenced the election,’ I would’ve never stood for it,” she said. “Even though it might’ve advantaged me, I would’ve said, ‘We’ve got to get to the bottom of this.’” She probably meant disadvantaged.

She then proceeded to psychoanalyze Trump, saying that “I think part of the reason Trump behaves the way he behaves is that he is a walking example of projection. Whatever he’s doing and whatever he thinks is happening he will accuse somebody else of”, she concluded without a trace of irony.

Unfortunately for Hillary, if you remove the the million cushion of votes HRC garnered in California (she did not need to focus so much on blowing away Trump in California, the state was hers from day one), then the popular vote tipped Trump…and Hillary did not seemed to be bothered by the fact that CNN and the DNC was openly rigging the primary in her favor, and to the detriment of a surging Bernie Sanders.

Once again, everything that comes out of Hillary’s mouth is complete and utter bullshit, believed only by the dumbest of dumb.

Until it does, THE US INTELLIGENCE COMMUNITY can only be regarded as a BUNCH OF FRAUDS…

As for Crooked Hillary, she should just STFU for her own good…

Watching the US fold is worse than sitting through a Tarantino schlock flick.

Google is paying 97$ per hour,with weekly payouts.You can also avail this.
On tuesday I got a great new Land Rover Range Rover from having earned $11752 this last four weeks..with-out any doubt it’s the most-comfortable job I have ever done .. It sounds unbelievable but you wont forgive yourself if you don’t check it
!si297:
➽➽
➽➽;➽➽ http://GoogleDailyNewsSilverUpdateWorkFromHome/find/jobs… ★✫★★✫★✫★★✫★✫★★✫★✫★★✫★✫★★✫★✫★★✫★✫★★✫★✫★★✫★✫★★✫★✫★★✫★✫:::::!sf257..,…..

Hillary is a disease for which there is no cure. Her parents should have names her “Herpes Rodham.”

Actually, Bill gave Crooked Hillary herpes after having intercourse with so many tarts….

Billy Clinton is a public danger, you know…

Billy boy promised ?? That or the herpes ???

Perhaps the kind act of having the decency to put rabid dogs down should be applied to this case. 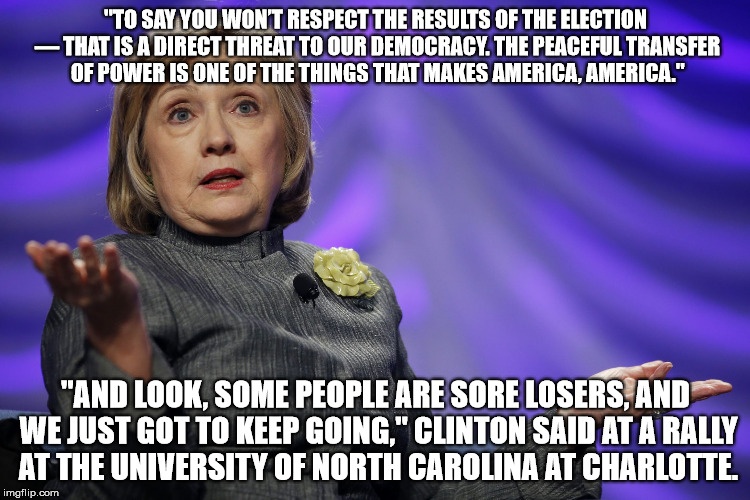 Sore loser in chief still wants to look like a fool.

The ‘loser’, the ex Secretary of State, one of the Highest positions in the USA, requiring TOP security clearance, who by HER OWN admission, was too STUPID to know that “C” on official documentation meant confidential/CLASSIFIED and her ex boss, both aided and abetted by the corrupt and biased mainstream media, have been ‘orchestrating’ a seditious campaign against the incumbent president, in the OPEN….unhindered.