Yesterday The Duran reported on the latest, simmering crises in the Middle East, where Lebanon finds “itself in the thick of things as Saudi Arabia on Monday accused it of declaring war on the Kingdom through aggression by the Iran-backed Shiite group, Hezbollah.”

This accusation comes days after Lebanese Prime Minister, Saad Hariri resigned while sitting in Saudi Arabia, citing the interference of Iran and Hezbollah as the reason.

The Arab country has thus been opened up as yet another territory of conflict between Iran and Saudi Arabia.Saudi Gulf affairs minister Thamer al-Sabhan said the Lebanese government would “be dealt with as one that is declaring war on Saudi Arabia” because of what he termed as aggression by Hezbollah. Sabhan blamed the Hariri-led government for failing to rein-in Hezbollah.

He said: “There are those who will stop (Hezbollah) and make it return to the caves of South Lebanon. The Lebanese must all know these risks and work to fix matters before they reach the point of no return”. 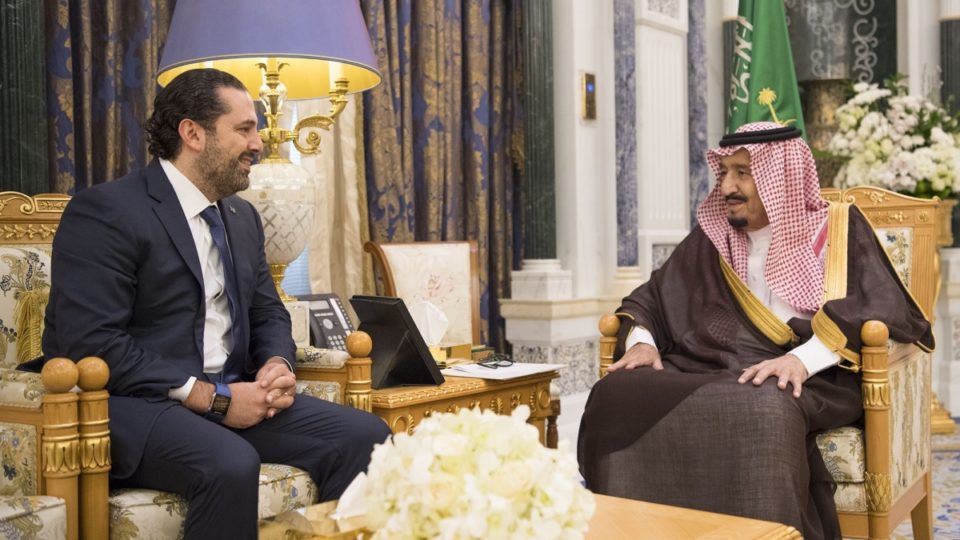 Now that Syria is off the table for regime change, effectively blocking a Saudi pipeline into the European market, Saudi Arabia and the United Arab Emirates are zeroing in on Lebanon.

“Lebanon – the next front in the Great Gas War” via by Golem XIV.

The Great Gas War has already two distinct fronts: The now relatively quiet Northern Front in Ukraine and the Southern Front in Syria in which the Western empire has been losing. It looks to me that Lebanon is being targeted as the next front, where the West hopes its loses might be recouped.

Saudi Arabia said on Monday that Lebanon had declared war against it because of attacks against the Kingdom by the Lebanese Shi‘ite group Hezbollah.

This comes after Israel, Saudi’s long time though largely un-offical best friend in the region,  has been very publicly preparing to renew its own war with Lebanon – or more accurately with Hezbollah.  As the American news journal Newsweek put it recently,

ISRAEL PREPARES FOR ANOTHER WAR WITH HEZBOLLAH AS IDF PRACTICES LEBANON INVASION.

Why now and why Lebanon?  Well the rulers of Saudi, a Sunni dominated country, will tell us that it is because Hezbollah is a Shia terrorist organisation. “Hezbollah” literally means the “Party of Allah” or “Party of God”.  Saudi Gulf affairs minister Thamer al-Sabhan yesterday pointedly referred to Hezbollah as, “the Lebanese Party of the Devil”.  Saudi is not alone of course, Hezbollah has also been listed as a terrorist organisation by America, Israel, the Arab League, the UK and the EU. It is also, however, part of the popular government of Lebanon having seats in its parliament.

I suggest, however, a powerful reason that a new war with Hezbollah may be in the offing is because Lebanon is the next link in any gas pipeline that could potentially bring Iranian Gas to Europe. That was the reason the West decided to “liberate” the Syrian people and it will be why they decide to enforce the same salvation upon the people of Lebanon. Having failed to liberate the Syrians, Saudi, the West, its Sunni Gulf allies and Israel will now see if they can succeed in blocking any Iranian gas ambitions by liberating the Lebanese from their own government.  I would not be surprised to hear quite soon from opposition groups vocally denouncing the government or at least Hezbollah. I expect spokes people from those groups to suddenly get a global platform along-side American and regional supporters such as Saudi.

When I look at Saudi I can’t help but notice that it has , all in a short space of time, begun wars in neighbouring Yemen and Syria, and declared first Qatar and now Lebanon supporters of terror if not actually themselves terrorists. Saudi has gone from a nation surrounded by allies or at least states with whom it had basic diplomatic relations, to a nation surrounded by enemies.  It begins to remind me of Israel in that respect.

Gas of course is not the be all and end all. In many ways it is a surface marker, the means for regional and global struggles for political power and influence.  For Saudi it is the basis of its struggle for regional supremacy with Qatar. For America it is the regional marker for its proxy struggle with Russia for political dominance and for control over gas supplies to Europe.  America has sided with Saudi. Russia and China have sided with Qatar.  Qatar struck a decisive blow for dominance and for a new Qatar focussed power structure when it opened the region’s only clearing house for settlement of Gas contracts in Yuan.

I see the political turmoil inside Saudi as a struggle between those who see the House of Saud’s only hope for a future to be to remain firmly aligned with America and therefore by extension, with Israel, versus those who might consider switching or at least splitting their allegiance so as to move closer to Russia/China. A move which might be correct but which would concede to Qatar some large portion of what has been up till now Saudi’s pre-eminence.

Wars in Yemen, Syria and soon Lebanon make the divide between these two possible futures for The House of Saud, very sharp.

For Israel it will mean war and troops on the ground. America will certainly help in the air but Israel will shed blood on the ground.

What will Russia do? I doubt it will put troops into Lebanon. But I could very easily see it extending in to Lebanon the air support it has deployed in Syria. I could see Iran being tempted to send troops or at least ‘advisors’ or perhaps just ‘allow’ zealots who want to go, to do so. And that itself may be part of what some in America would like – tempt Iran into lending support and then declare anew that Iran is, pointing at new evidence,  a state sponsor of international terror.  America has desired a confrontation with Iran for a long time and want a new excuse.

The Great Gas War has not finished. I suggest it is about to open a new front. A front that could ignite a wider conflict.

In case anyone should be interested to read my analysis of the Syrian front of the Great Gas War here are the links to the three articles in that series: