Zerohedge reports that NATO defense ministers got together in Brussels yesterday (and today) for a two day meeting to discuss Washington’s concerns over the European Union’s new plans to deepen defense ties between its members, and increasingly strained US-Turkey relations; and they will also discuss the ever present topic of defense spending.

On Sunday a senior official working with US Defense Secretary Jim Mattis said Washington had concerns that some of the proposed initiatives risked “pulling resources or capabilities away from NATO.”

Despite the concerns of the United States, the alliance’s most powerful member, NATO Secretary General Jens Stoltenberg said the right balance could be struck.

“Done in the right way, these efforts can make a contribution to fairer burden-sharing between Europe and North America,” Stoltenberg told reporters as he arrived for talks with NATO defence ministers on Wednesday.

US President Donald Trump has repeatedly urged allies to increase their share of spending to ease Washington’s burden. 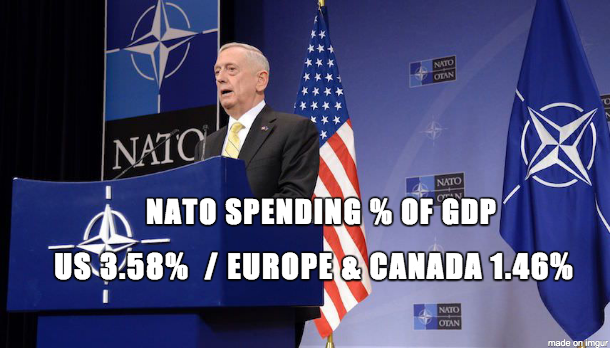 On Tuesday Stoltenberg said the EU’s efforts to boost its defense spending under the pact were welcome, but only if they were coordinated with NATO plans.

He warned there was “no way” the EU could replace the transatlantic alliance in guaranteeing European security.

“It will be absolutely without any meaning if NATO and the EU start to compete,” the former Norwegian premier told reporters.

“European allies are absolutely aware that the defense, the protection of Europe is dependent on NATO.”

But, as Statista’s Dyfed Loesche notes, Stoltenberg confirmed that more member countries are on track to meet the NATO minimum spending goal of 2 percent of their GDP.

However, NATO’s own figures show that the United States remains the defense hegemon within the organization.

On the one hand, American defense spending has dropped compared to 2010, but Canada and NATO’s European members taken together have not increased their spending in return until 2017. 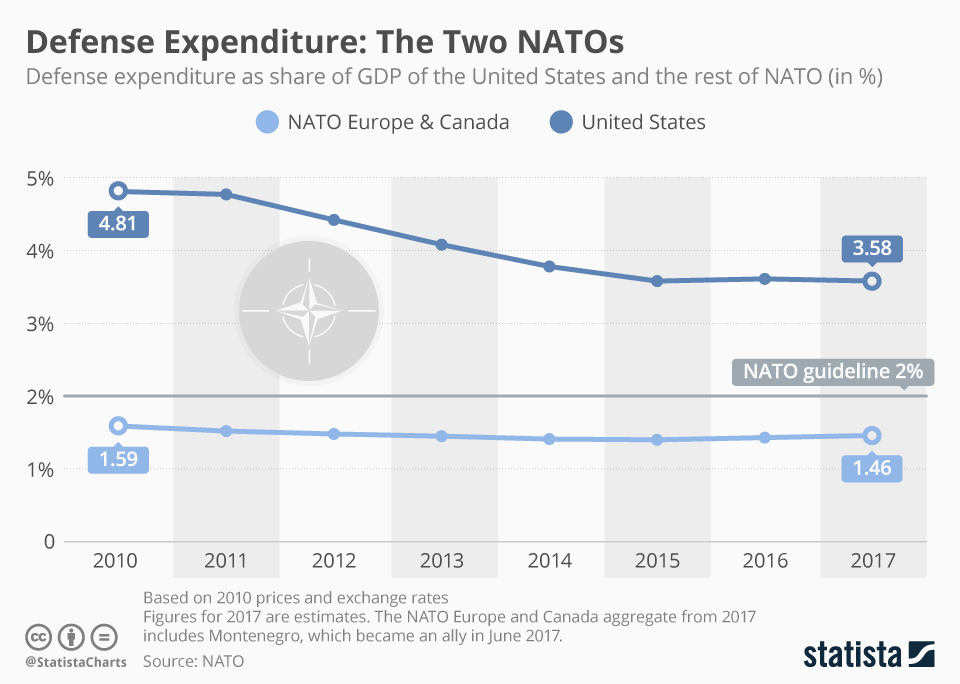 You will find more infographics at Statista.