For all the mainstream media bluster that Trump’s approval ratings are crap…Matt Drudge provided a rare holiday tweet pointing out that POTUS Trump is exactly where former POTUS Obama was at same exact date first year in presidency.”

Matt Drudge fairly compared Trump’s approval ratings to Obama’s ratings at the same exact date in the first year of his presidency and pointed out they are identical.

In a very rare tweet, Matt Drudge said, “Rasmussen Poll shows Trump at 46% APPROVE this morning, with 53% DISAPPROVE… What about Obama at same exact date first year in presidency?? 46% APPROVE, 53% DISAPPROVE!” (screenshot below because Matt Drudge deletes his tweets after a couple days): 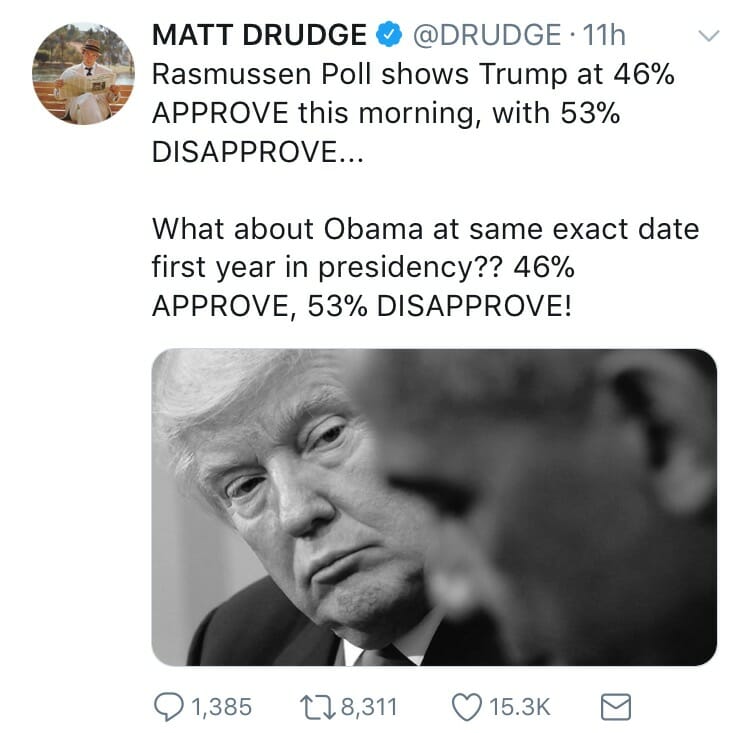 Rasmussen Poll shows Trump at 46% APPROVE this morning, with 53% DISAPPROVE…

The fake news media loves to beat up on President Trump. In fact a Pew Research study found that only 5% of the mainstream media coverage about Trump is positive.

President Trump’s approval rating is the exact same as Obama’s was this far into his first year of presidency and Obama had the media sycophants slobbering all over him showering him with positive coverage.

Fake News Newsweek ran a headline last week, ‘TRUMP’S APPROVAL RATING IS LOWER THAN ANY OTHER PRESIDENT AT THE END OF HIS FIRST YEAR’

Only to begrudgingly run another headline Thursday, ‘TRUMP APPROVAL RATING SAME AS OBAMA AFTER FIRST YEAR, AT LEAST ACCORDING TO ONE POLL’

Americans are optimistic for the first time in 8 years. The economy is turning around thanks to President Trump cutting regulation and taxes.