The Clinton mafia’s body count may have just grown by one…this time even ensnaring a man from Malta.

Joseph Misfud is the Maltese academic who told ex-Trump camp volunteer, George Papadopoulos in April of 2016 that he has ‘dirt’ on the Clintons, according to a U.S. affidavit.

Misfud is referred to as ‘Foreign Contact 1’ in the affidavit. He said the Russians have thousands of emails relating to Hillary Clinton.

Misfud disappeared three days after the affidavit was unsealed according to CNN. 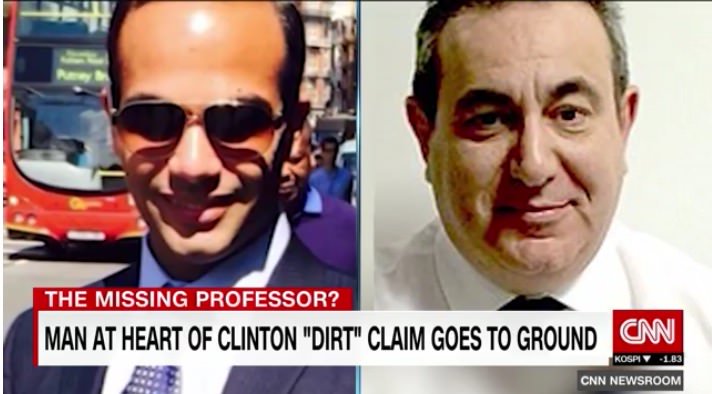 Joseph Mifsud, the Maltese academic suspected of being a link between the Trump campaign and Russian officials, was once a regular on the foreign policy circuit, attending conferences the world over.

Now, after being identified as a key figure in the US special counsel investigation into Russian influence over the 2016 US presidential election, Mifsud has gone to ground.

Last Thursday he disappeared from the private university in Rome where he teaches. Repeated attempts to reach him since have been unsuccessful, though he appears to have read some messages from CNN.

But more details are emerging of the background and contacts of the man who emerged last week as “the professor” in court filings relating to charges brought against former Trump aide George Papadopoulos.

In the US affidavit, Papadopoulos claims Mifsued — referred to as “Foreign Contact 1” — told him in April 2016 that the Russians had “thousands of emails” relating to Hillary Clinton.

In an email to fellow colleagues, Papadopoulos wrote that he had a good friend in Russia who introduced him to Putin’s niece and a Russian ambassador. This ‘good friend’ of his turned out to be Misfud and he supposedly had tons of dirt on the Clintons.

CNN also reported last week, in his last words to the public before disappearing, Mifsud described Papadopoulos’ claim that he knew about Russia’s material on Clinton as “baloney.”

“I absolutely exclude the fact that I spoke of secrets regarding Hillary Clinton,” he told La Repubblica.

Papadopoulos was an unpaid volunteer in the Trump camp who was recently charged with making a false statement to the FBI. He was not charged with communicating to Russians since that is not a crime.

The Maltese professor, Joseph Mifsud, who was believed to be the link between Russian officials and the US presidential election of Donald Trump, has reportedly gone missing, according to CNN.

The news site said that Mifsud, “disappeared from a private university in Rome where he teaches”.

“Repeated attempts to reach him since have been unsuccessful, though he appears to have read some messages from CNN”, the site added.

Mifsud’s role emerged in court documents, which had been filed in relation to charges against Trump’s former aide, George Papadopoulos, who claimed that Mifsud told him that the Russians were in possession of “compromising material” regarding Hilary Clinton, back in 2014.

According to an associate, Mifsud said he had been interviewed by the FBI, while on a visit to the US earlier this year. This goes hand in hand with Mifsud’s own account, as he referred to the same discussion in an interview with La Repubblica, last week.

Members from the institute of Global Studies in Moscow informed CNN, on Tuesday, that Mifsud presented him as someone who could build contacts to foreign universities and institutes.

In spite of this, CNN reported that Mifsud’s relationships with several academic institutions having “ended badly.” His resume from a London institution was subsequently deleted and his connection with the University of East Anglia was ended.

“People who know him say Mifsud was always networking and often exaggerated his access to decision-makers. His stories are frequently contradictory. He has denied knowing anyone in the Russian government yet had previously claimed to have had an exchange with Foreign Minister Sergey Lavrov at an event.

Nor is there any evidence to support a claim by Mifsud that he met President Putin,” CNN said.

Will the professor be found or will he join the ever growing list of people mysteriously found dead after contact with the Clinton mafia (via ThoughtCo)?

This is what happens when you have dirt on the Clintons:

1 – James McDougal – Clinton’s convicted Whitewater partner died of an apparent heart attack, while in solitary confinement. He was a key witness in Ken Starr’s investigation.

2 – Mary Mahoney – A former White House intern was murdered July 1997 at a Starbucks Coffee Shop in Georgetown. The murder happened just after she was to go public with her story of sexual harassment in the White House.

4 – Ron Brown – Secretary of Commerce and former DNC Chairman. Reported to have died by impact in a plane crash. A pathologist close to the investigation reported that there was a hole in the top of Brown’s skull resembling a gunshot wound. At the time of his death Brown was being investigated, and spoke publicly of his willingness to cut a deal with prosecutors.

7- Ed Willey – Clinton fund raiser, found dead November 1993 deep in the woods in VA of a gunshot wound to the head. Ruled a suicide. Ed Willey died on the same day his wife Kathleen Willey claimed Bill Clinton groped her in the oval office in the White House. Ed Willey was involved in several Clinton fund raising events.

8 – Jerry Parks – Head of Clinton’s gubernatorial security team in Little Rock. Gunned down in his car at a deserted intersection outside Little Rock. Park’s son said his father was building a dossier on Clinton. He allegedly threatened to reveal this information. After he died the files were mysteriously removed from his house.

9 – James Bunch – Died from a gunshot suicide. It was reported that he had a “Black Book” of people which contained names of influential people who visited prostitutes in Texas and Arkansas.

10 – James Wilson – Was found dead in May 1993 from an apparent hanging suicide. He was reported to have ties to Whitewater.

12 – Bill Shelton – Arkansas State Trooper and fiancee of Kathy Ferguson. Critical of the suicide ruling of his fiancee, he was found dead in June, 1994 of a gunshot wound also ruled a suicide at the grave site of his fiancee.

13 – Gandy Baugh – Attorney for Clinton’s friend Dan Lassater, died by jumping out a window of a tall building January, 1994. His client was a convicted drug distributor.

15 – Suzanne Coleman – Reportedly had an affair with Clinton when he was Arkansas Attorney General. Died of a gunshot wound to the back of the head, ruled a suicide. Was pregnant at the time of her death.

17 – Danny Casolaro – Investigative reporter. Investigating Mena Airport and Arkansas Development Finance Authority. He slit his wrists, apparently, in the middle of his investigation.

18 – Paul Wilcher – Attorney investigating corruption at Mena Airport with Casolaro and the 1980 “October Surprise” was found dead on a toilet June 22, 1993 in his Washington DC apartment. Had delivered a report to Janet Reno three weeks before his death

20 – Barbara Wise – Commerce Department staffer. Worked closely with Ron Brown and John Huang. Cause of death unknown. Died November 29, 1996. Her bruised, nude body was found locked in her office at the Department of Commerce.

23 – Barry Seal – Drug running pilot out of Mena, Arkansas, death was no accident.

24 – Johnny Lawhorn Jr. – Mechanic, found a check made out to Bill Clinton in the trunk of a car left at his repair shop. He was found dead after his car had hit a utility pole.

25 – Stanley Huggins – Investigated Madison Guarantee. His death was a purported suicide and his report was never released.

27 – Kevin Ives and Don Henry – Known as “The boys on the track” case. Reports say the boys may have stumbled upon the Mena Arkansas airport drug operation. A controversial case, the initial report of death said, due to falling asleep on railroad tracks. Later reports claim the two boys had been slain before being placed on the tracks. Many linked to the case died before their testimony could come before a Grand Jury.

THE FOLLOWING PERSONS HAD INFORMATION ON THE IVES/HENRY CASE:

33 – James Milan – Found decapitated. However, the Coroner ruled his death was due to “natural causes.”

34 – Jordan Kettleson – Was found shot to death in the front seat of his pickup truck in June 1990.