US President Donald Trump gave a stirring ‘campaign-like’ speech in Alabama in support of Luther Strange, during a close Republican primary race for the US Senate seat left vacant by AG Jeff Sessions.

During his speech, Trump weighed in on North Korea, rebranding Kim Jong-un from “Rocket Man” to  “Little Rocket Man.”

A demotion in nicknames.

Trump began his speech in Huntsville, Alabama by telling the massive crowd that “Little Rocket Man” should have been “handled” a long time ago.

“We can’t have madmen out there, shooting rockets all over the place.”

“This shouldn’t be handled now, but I’m going to handle it because we have to handle it.”

Trump then spoke directly to the North Korean leader, saying “maybe something gets worked out, and maybe it doesn’t.”

Trump also said that China is working with the United States on heavier sanctions against North Korea, calling the Chinese President Xi Jinping his “friend”…

“And yesterday he basically took the banking industry from North Korea,.”

Trump has endorsed Strange, tweeting that he “has gained mightily since my endorsement,” but adding that the inter-party vote “will be very close.”

However, it is unclear how much Trump’s endorsement has affected the race. On Thursday, a WALA-TV/Strategy Public Relations poll found that Roy Moore, Alabama Chief Justice of the state Supreme Court, was leading Strange by eight percentage points. RealClear Politics also has Moore, who has the support of many Trump grassroots supporters, leading Strange by an average of nine points.

Will be in Alabama tonight. Luther Strange has gained mightily since my endorsement, but will be very close. He loves Alabama, and so do I!

But bigger hands, and I’d vouch for a bigger functioning brain also.

One must ponder at the level of discourse – Name-calling??and escalation in this regard??
So Rocket man calls twitter man “Dotard”, twitter man calls Rocket man “little Rocket man”.
Spite and egomaniacal self-absorbance , doesn’t help in the climb-down if a climb-down is what is wanted. That is the question. 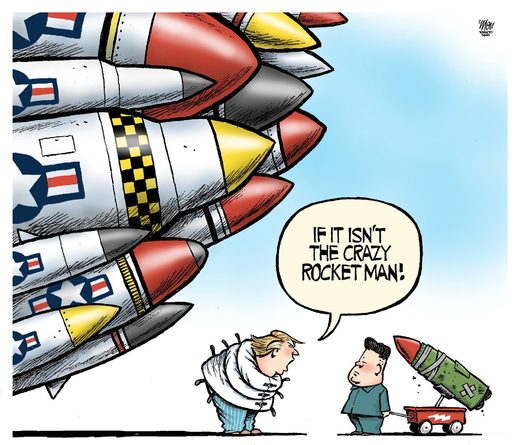 Definitely the new Hitler. He as it all. Fanatical crowds, gestures and nationalistic rhetoric. The US is already fascist, i.e. the bundle (fasces) of private corporate, state and military interests. So far Trumpism/Nazism is still only a large minority, but so was Hitlerism/Nazism until the Reichstag false flag, so too the Nazi US until the N Korean false flag? Don’t say I did not warn you. I will be glad to be wrong, … but?