Google is learning from its mistakes.

Not being able to place Hillary Clinton in office, the search monopoly has decided that online influence over what Americans think, say, and do is not enough to guarantee the right woman enters the White House.

Google is now embarking on a 5 year plan, where they will seed 1,000 aspiring, liberal left journalists into America’s local media markets.

Poynter reports that the Google News Lab will be working with Report For America (RFA) to hire 1,000 journalists all around the country.

Many local newsrooms have been cut to the bone so often that there’s hardly any bone left. But starting early next year, some may get the chance to rebuild, at least by one.

On Monday, a new project was announced at the Google News Lab Summit that aims to place 1,000 journalists in local newsrooms in the next five years. Report For America takes ideas from several existing organizations, including the Peace Corps, Americorps, Teach for America and public media.

Unlike foreign or domestic service programs or public media, however, RFA gets no government funding. But they are calling RFA a national service project. That might make some journalists uncomfortable – the idea of service and patriotism. But at its most fundamental, local journalism is about protecting democracy, said co-founder Charles Sennott, founder and CEO of the GroundTruth Project.

“I think journalism needs that kind of passion for public service to bring it back and to really address some of the ailments of the heart of journalism,” he said.

Here’s how RFA will work: On one end, emerging journalists will apply to be part of RFA. On the other, newsrooms will apply for a journalist. RFA will pay 50 percent of that journalist’s salary, with the newsroom paying 25 percent and local donors paying the other 25 percent. That reporter will work in the local newsroom for a year, with the opportunity to renew.

Of course, while the press release above tries to tout the shared financial responsibility of these 1,000 journalists, presumably as a testament to their ‘independence’, it took about 35 seconds to figure out that the primary funder of the journalists’ salaries, RFA, is funded by none other than Google News Lab.

Meanwhile, as a further testament to RFA’s ‘independence, we noticed that their Advisory Board is flooded with reputable, ‘impartial’ news organizations like the New York Times, NPR, CBS, ABC, etc…. 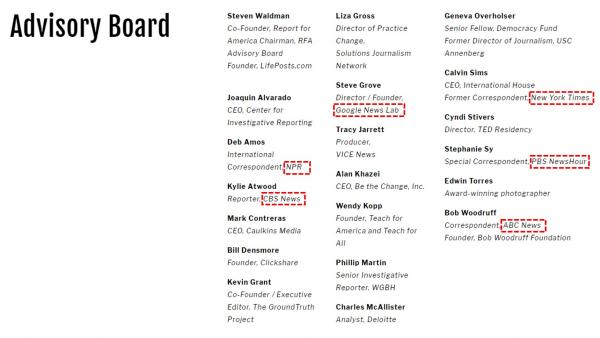 We are sure that these 1,000 journalists will never be called upon by Google to report on the news in a way that benefits the giant search company.

Why so many? After all, they will all end up writing the same thing.

Why jump aboard a sinking ship?

Really? You need to FIRST find ONE “journalist” in amerika, good luck with that. Like looking for rocking horse sh*t.

The Duran loves to call all the media the ‘liberal left’ but look at the institutions on the board. NPR and PBS are both very conservative members of the War Party, funded by petroleum companies and happy to toe their line. Looking elsewhere at ‘Senior Fellow, Democracy Fund’ one can ascertain this is very much the normal mainstream, status quo, corporate-backed, State Department friendly crowd. Neo-liberal perhaps, but fully committed to maintaining US hegemony with no care for any true left principles such as worker rights, fair pay, world peace, etc. The only thing ‘left’ about them is that they… Read more »