The Hungarian government has resumed its campaign against Hungarian-American billionaire philanthropist George Soros and his support for migration.

The government’s “national consultation” includes a survey sent to Hungarian households about a so-called “Soros Plan” — which the government says is being carried out by the European Union — as well as billboards and television ads.

Goran Buldioski, director of Soros’ Open Society Initiatives in Europe, says Soros and his foundations support “more coherent and humane policies for helping to resettle migrants fleeing oppression and violence in their homelands” but that “there is no such thing as a global conspiracy against Hungary.”

According to Zerohedge, tensions between Orban and Soros escalated last month when Orban took it upon himself to mail a Soros-related questionnaire to all 8 million Hungarian voters (see: Hungary Launches Anti-Soros Political Campaign) and then followed that up with an announcement that Hungary’s intelligence services had been instructed to “map” Soros’ network of influence.

As Orban’s ruling party gears up for parliamentary elections in April – where it is the prohibitive favorite to win largely thanks to its refusal to accept refugees under a plan devised by the European Commission – the prime minister has instructed his intelligence services to map what he described as the networks run by the billionaire financier’s “empire” targeting his country, Bloomberg reported.

Intelligence agencies will help evaluate what he sees as efforts by Soros to get Hungary punished by EU institutions pursuing a “mixed-population” continent, Orban said in an interview with Kossuth Radio on Friday.

The Associated Press added that the investigation will also focus on alleged Hungarian members of the network.

Intelligence agencies will help evaluate what Orban sees as efforts by Soros to get Hungary punished by EU institutions pursuing a “mixed-population” continent, Orban said in an interview with Kossuth Radio on Friday.

Zerohedge reports that Soros has decided to strike back with a scathing “rebuttal” posted to his website blasting Orban for his “anti-Soros, anti-Muslim, anti-Semitic propaganda effort.”

With Hungary’s health care and education systems in distress and corruption rife, the current government has sought to create an outside enemy to distract citizens. The government selected George Soros for this purpose, launching a massive anti-Soros media campaign costing tens of millions of euros in taxpayer money, stoking anti-Muslim sentiment, and employing anti-Semitic tropes reminiscent of the 1930s. The national consultation is part of an ongoing propaganda effort that has been underway since May 2015 that included the “Stop Brussels” consultation in the spring of 2017 and the referendum that vilified migrants and refugees in 2016. 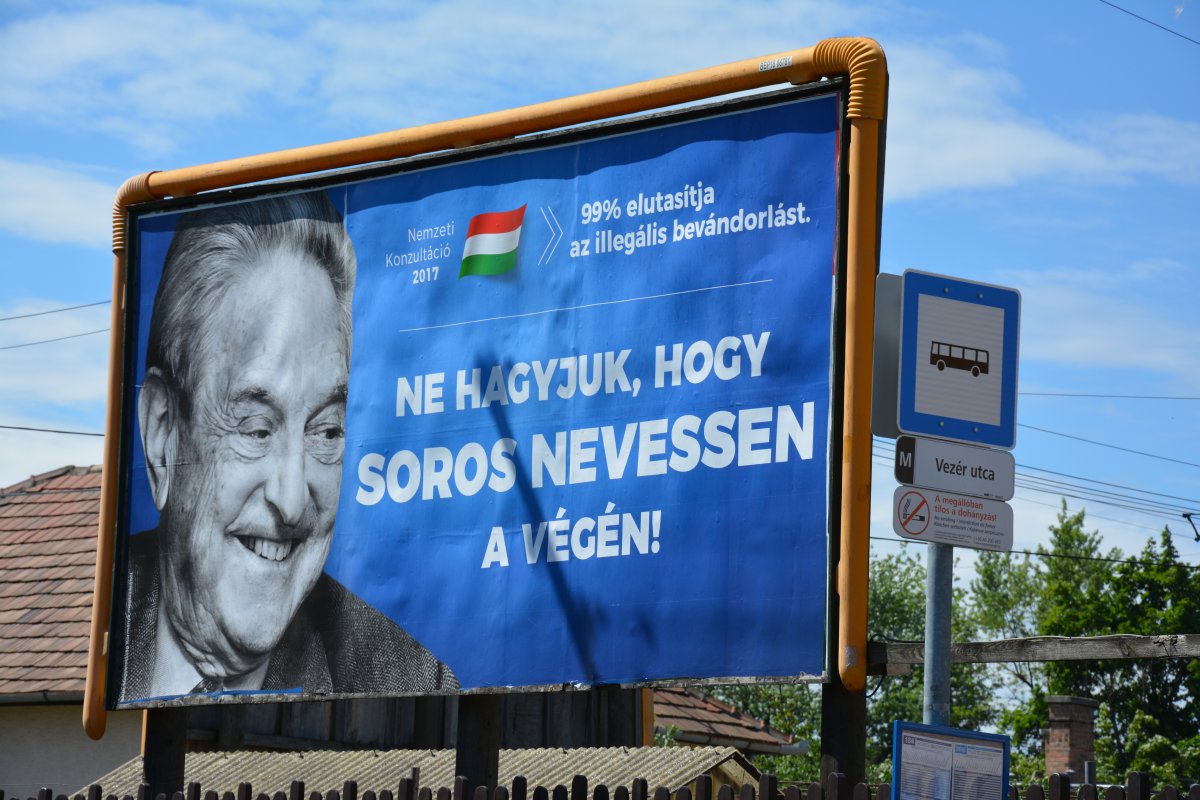 Soros went on to offer a “rebuttal”, which in several cases read more like a confirmation, of Orban’s “propaganda”…

National Consultation Statement 1: George Soros wants Brussels to resettle at least one million immigrants per year onto European Union territory, including in Hungary.

Soros Response: FALSE.  In a 2015 opinion piece, George Soros said that because of the war in Syria, the European Union would have to “accept at least a million asylum-seekers annually for the foreseeable future. And, to do that, it must share the burden fairly” (“Rebuilding the Asylum System,” Project Syndicate, September 26, 2015). A year later, when circumstances had changed, he suggested that the EU should make a “commitment to admit even a mere 300,000 refugees annually” (“Saving Refugees to Save Europe,” Project Syndicate, September 12, 2016).

National Consultation Statement 2: Together with officials in Brussels, George Soros is planning to dismantle border fences in EU member states, including in Hungary, to open the borders for immigrants.

Soros Response: FALSE. George Soros has clearly stated his belief that “the EU must regain control of its borders.” He believes that “the EU must build common mechanisms for protecting borders, determining asylum claims, and relocating refugees.” (“Saving Refugees to Save Europe,” Project Syndicate, September 12, 2016).

National Consultation Statement 3: One part of the Soros Plan is to use Brussels to force the EU-wide distribution of immigrants that have accumulated in Western Europe, with special focus on Eastern European countries. Hungary must also take part in this.

Soros Response: FALSE. In his most recent commentary on the refugee crisis, George Soros endorsed “a voluntary matching mechanism for relocating refugees.” He made clear that “the EU cannot coerce member states to accept refugees they do not want, or refugees to go where they are not wanted.” (“Saving Refugees to Save Europe,” Project Syndicate, September 12, 2016).

National Consultation Statement 4: Based on the Soros Plan, Brussels should force all EU member states, including Hungary, to pay immigrants HUF 9 million (€28,000) in welfare.

Soros Response: FALSE. George Soros did not say that Hungary should be forced to pay HUF 9 million in welfare to immigrants. He did say, “Adequate financing is critical. The EU should provide €15,000 per asylum-seeker for each of the first two years to help cover housing, health care, and education costs—and to make accepting refugees more appealing to member states.” (“Rebuilding the Asylum System,” Project Syndicate, September 26, 2015). This would clearly be a subsidy from the EU to the Hungarian government. Last year George Soros announced that he would contribute to the financial effort by earmarking €430 million of his personal fortune “for investments that specifically address the needs of migrants, refugees and host communities.” (“Why I’m Investing $500 Million in Migrants,” The Wall Street Journal, September 20, 2016).

National Consultation Statement 5: Another goal of George Soros is to make sure that migrants receive milder criminal sentences for the crimes they commit.

Soros Response:  FALSE. Nowhere has Soros made any such statement. This is a lie.

National Consultation Statement 6: The goal of the Soros Plan is to push the languages and cultures of Europe into the background so that integration of illegal immigrants happens much more quickly.

Soros Response: FALSE. Nowhere has Soros made any such statement. This is a lie.

National Consultation Statement 7: It is also part of the Soros Plan to initiate political attacks against those countries which oppose immigration, and to severely punish them.

Soros Response: FALSE. Nowhere has Soros made any such statement. This is a lie.

Zerohedge further reports that three decades ago, billionaire financier George Soros paid for a young Viktor Orbán to study in Britain. And as recently as 2010, Soros donated $1 million to Orbán’s government to help the cleanup effort following the infamous “red sludge” disaster.

But the once-warm relationship between the two men has deteriorated substantially over the past seven years, as Orban has drifted further to the right. In 2014, the leader of Hungary’s Fidesz party declared he would seek to model Hungary’s government after “illiberal” democracies like the government of Russian President Vladimir Putin. In response, Soros this summer denounced his former protege and accused him of creating a “mafia state” in Hungary.

Orban responded by accusing Soros’s network of using the European Union to achieve its own aims, including the promotion of mass migration into Europe.

Orban was no doubt provoked to launch the probe by reports Soros has donated $18 billion from his family office to his “Open Society” foundation, his primary tool for influence policy throughout the west. The group funds a network of dozens of organizations that fund liberal, globalist causes throughout Europe and the US. At times, recipients of funding have included Black Lives Matter groups, and even Antifa.