ABC News is reporting that Michael Flynn, the former national security adviser, will testify that he was directed by Donald Trump to make contact with “the Russians”…whatever that means.

It remains to be seen how Mueller and the anti-Trump mainstream media swamp will spin “contact” to mean “collusion”, to mean “meddling”, to mean “impeachment.”

ABC News’ @BrianRoss reports that Flynn is prepared to testify President Trump directed him to make contact with Russians https://t.co/Mtt1n8DYi0

Here are more headlines via Zerohedge…

Reuters adds some color on what is occurring in the court:

After over 33 years of military service to our country, including nearly five years in combat away from my family, and then my decision to continue to serve the United States, it has been extraordinarily painful to endure these many months of false accusations of “treason’ and other outrageous acts.

Such false accusations are contrary to everything I have ever done and stood for.

But I recognize that the actions I acknowledged in court today were wrong, and, through my faith in God, I am working to set things right.

My guilty plea and agreement to cooperate with the Special Counsel’s Office reflect a decision I made in the best interests of my family and of our country. I accept full responsibility for my actions.

Zerohedge is reporting troubling news for Trump and his impeachment odds, which have spiked on the news… 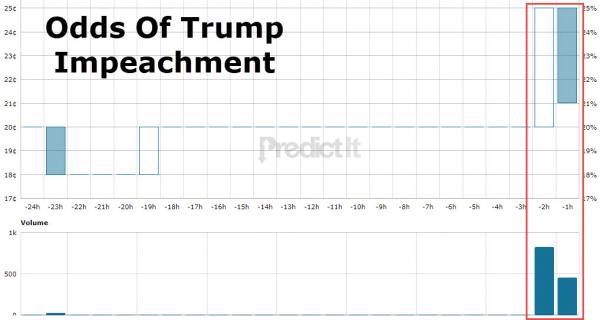