Simona Papadopoulos, wife of George Papadopoulos was on Tucker Carlson Tonight pleading with President Trump to pardon her husband who was set up by the FBI during the 2016 campaign.

George and Simona met in England and were married this year. George Papadopoulos is now under a gag order until his sentencing.

The origins of the entire Trump-Russia collusion hoax do not lie with George Papadopoulos, but with gone missing, Maltese professor, Joseph Mifsud.

I break it all down in the video below. Remember to Subscribe to The Duran’s YouTube Channel.

George Papadopoulos, the lower level campaign worker for the Trump campaign, appears to have been targeted by three individuals with ties to British and/or U.S. Intelligence: Joseph Mifsud, Alexander Downer and Stefan Halper.

Joseph Mifsud is a Maltese academic, with high level connections to the Russian state and UK politicians. Mifsud is a former employee of the Ministry of Foreign Affairs of Malta, a former principal in the London Centre of International Law Practice, a professorial teaching fellow at the University of Stirling in Scotland, and director of the Diplomatic Academy of London.

Mifsud and Papadopoulos obtained positions at an organization named the Centre for International Energy and Natural Resources Law & Security. Papadopoulos was a ‘nobody’ and the Centre sketchy at best. Mifsud vanished in early November 2017, shortly after Papadopoulos was in the news and indicted. His whereabouts are still unknown.

Although the common story is that Mifsud is a Russian Agent, many ties seem to lead [him] back to UK Intelligence. Julian Assange put out a Twitter thread noting the connection between Mifsud and UK Intelligence.

Brian Whitaker at Medium.com put together this map of Mifsud’s connections and organizations. 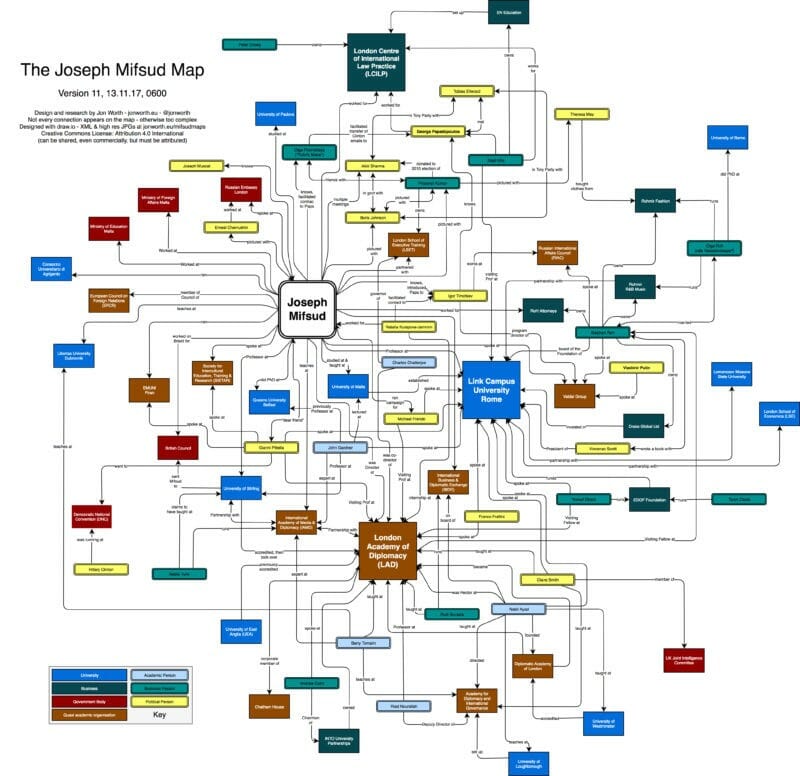 Mifsud has many suspect relationships with British and Russian operatives. Mifsud is a member of the European Council on Foreign Relations (ECFR).

The ECFR’s top donor is the Soros Open Society Foundation.

Again, Mifsud went missing in 2017 after his relationship with George Papadopoulos was exposed.