If justice truly is blind, than the latest Judicial Watch revelation that at least five emails (among the 2,800 documents stored on a laptop belonging to Anthony Weiner) were in fact determined to be classified, should place Huma Abedin and then-Secretary of State Hillary Clinton swiftly in prison for treason.

President of Judicial Watch Tom Fitton announced Thursday that the State Department will be releasing a portion of the documents found on Anthony Weiner’s laptop on Friday.

The Gateway Pundit, previously reported that conservative watchdog group Judicial Watch revealed in October the State Department admitted it received 2,800 Huma Abedin government documents from the FBI that were found on her husband Anthony Weiner’s laptop.

The FBI seized Weiner’s laptop after he was caught sexting with an underage teenager and discovered CLASSIFIED INFORMATION on the disgraced politician’s computer.

The Daily Mail now reports that at least five emails determined to be classified were found among 2,800 documents stored on a laptop belonging to Anthony Weiner, whose then-wife Huma Abedin was deputy chief of staff to then-Secretary of State Hillary Clinton.

The State Department released hundreds of pages of materials Friday afternoon, including a total of eight pages classified at the ‘confidential level,’ the third most sensitive level the U.S. government uses.

The emails date from 2010, 2011 and 2012 and concern discussions with Middle East leaders including some from Israel, the United Arab Emirates, Hamas and the Palestinian Authority.

Large portions, including entire pages, were redacted before the documents’ release.

Three of them were sent either to or from an address called ‘BBB Backup,’ which one email identifies as a backup of a Blackberry Bold 9700, presumably belonging to Abedin.

One page of a document released Friday is heavily redacted and marked ‘classified’; it mentions ‘update on Hamas-PA talks,’ referring to the Palestinian Authority.

Another is a four-page ‘call sheet’ meant to guide Clinton through a sensitive phone call with Benjamin Netanyahu.

The work-related emails and other documents were recovered from Weiner’s computer last year by the FBI.

Civilians like Weiner, who was once a congressman but resigned in mid-2011, are prohibited from possessing or reading classified documents without a security clearance.

Zerohedge reports that as a civilian, Weiner – though once a congressman, was unlikely to have possessed the proper clearance to view or store the classified documents on his laptop.

A sample of the documents can be seen below, first, a “Call Sheet” prepared for Hillary’s discussion with Israeli Prime Minister Benjamin Netanyahu: 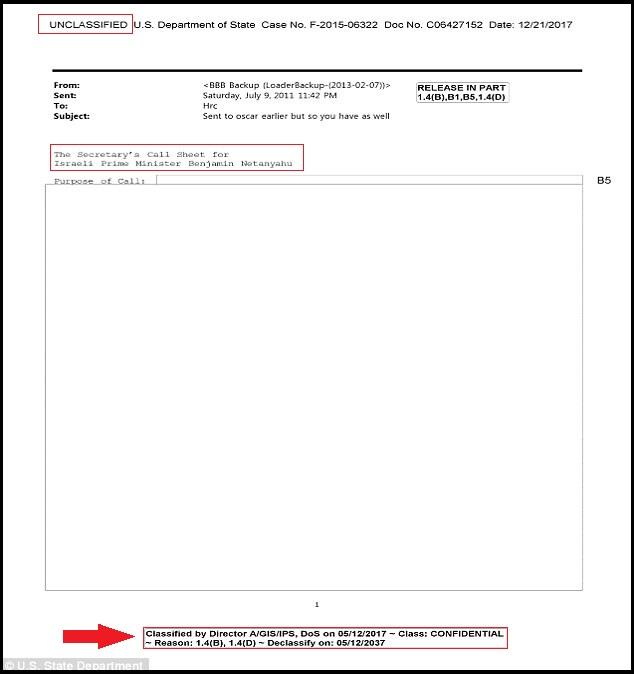 An update regarding “Hamas-PLO Talks”… 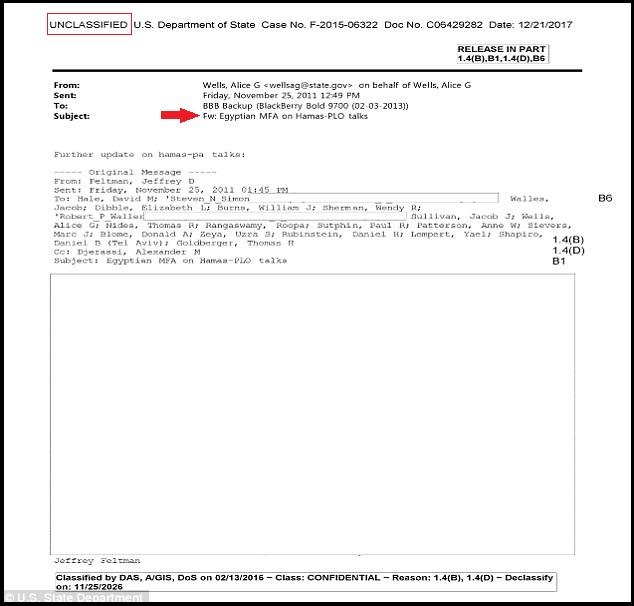 Zerohedge further reports that in at least two instances, Abedin directly forwarded Anthony Weiner official conversations – one of which included Hillary Clinton and senior advisor Jake Sullivan with subject “Lavrov” – referring to Russia’s Minister of Foreign Affairs, Sergey Lavrov. The email discusses an official response by a “quartet” of envoys (The US, EU, UN, and Russia) over Israel’s announced changes to its Gaza policy, ending a contentious blockade.

One wonders why Anthony Weiner would need to know about this? 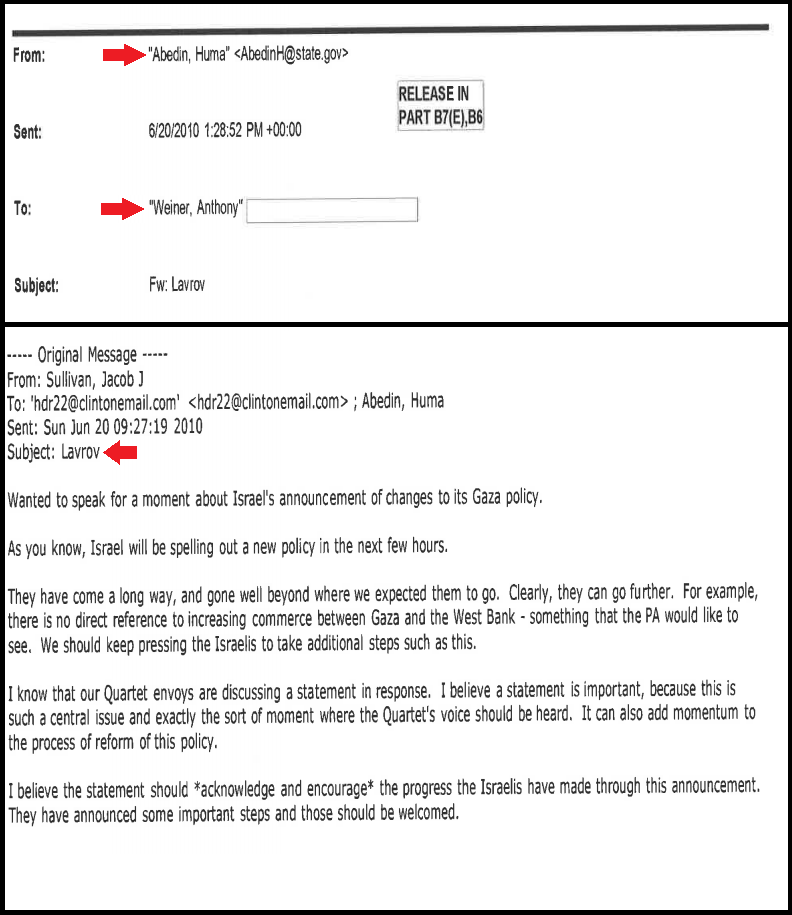 Abedin also forwarded Weiner an email discussion from July 22, 2012 which had previously been released by WikiLeaks – which included the Ambassador to Senegal, Mushingi Tulinabo. While the contents of the email are redacted, Senegal had elected a new President earlier that month. Of note, the Clinton Foundation has supported or been involved in several projects in the country. 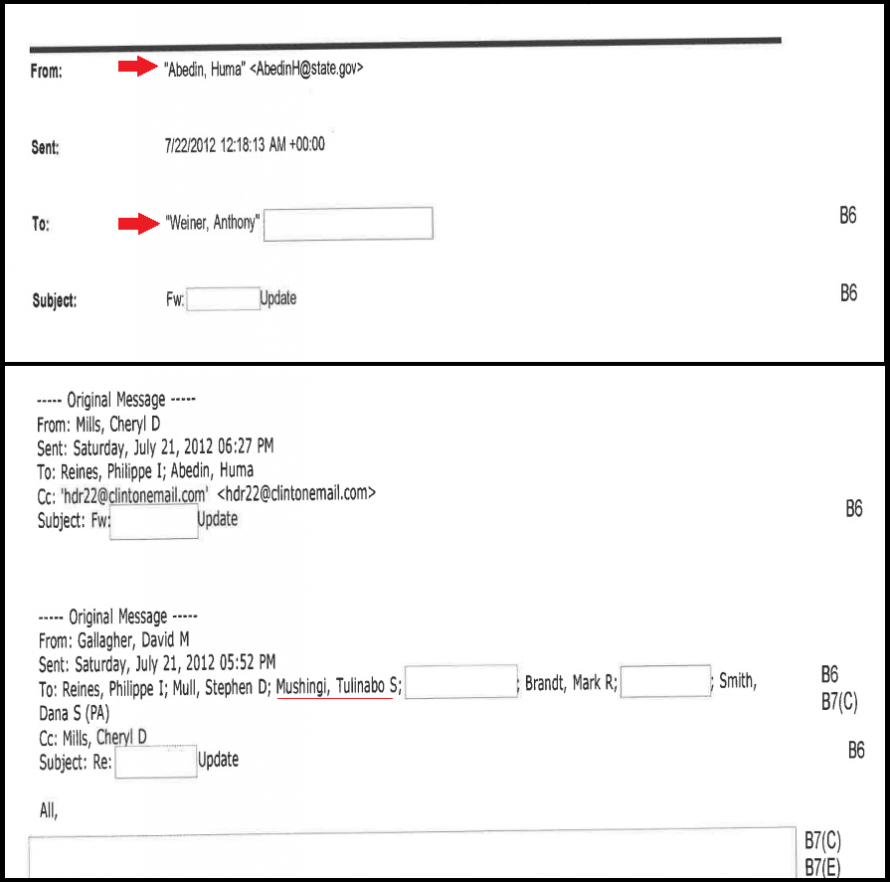 Judicial Watch’s Tom Fitton had this to say about the new Huma, Hillary document dump from the US State Department…

“After years of hard work in federal court, Judicial Watch has forced the State Department to finally allow Americans to see these public documents. It will be in keeping with our past experience that Abedin’s emails on Weiner’s laptop will include classified and other sensitive materials. That these government docs were on Anthony Weiner’s laptop dramatically illustrates the need for the Justice Department to finally do a serious investigation of Hillary Clinton’s and Huma Abedin’s obvious violations of law.”

Fitton also noted how “outrageous” it is to have Hillary Clinton and Huma Abedin walk out “of the State Department with classified documents and the Obama FBI and DOJ didn’t do a thing about it.”

Zerohedge reports that Huma Abedin was spotted heading into the Hillary Clinton offices in midtown Manhattan earlier today just a few hours before the release of the 2,800 emails.  Seems you’re never too old to be called into the Principal’s office…We’re confident this will all be promptly dismissed by Hillary as just another effort to “criminalize behavior that is normal “because what government employee hasn’t shared classified materials with their convicted pedophile husband? Certainly, just another boring day in Washington. 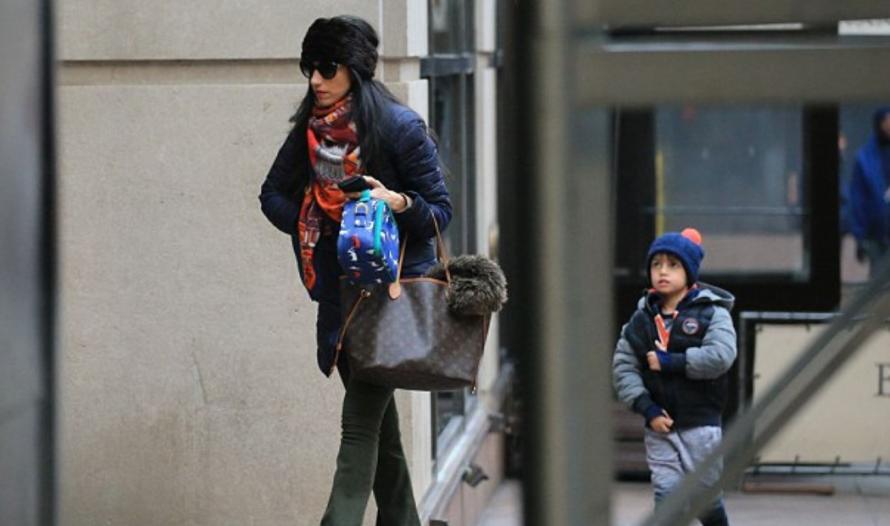