During a Thursday morning briefing on the shooting events, the local FBI chief made comments on the YouTube threat shooter Nikolas Cruz made online in 2017.

Nikolas Cruz, the suspect in Wednesday’s horrific massacre at a Florida high school, was allegedly reported to the FBI in September after he left a comment on a bail bondsman’s YouTube channel saying that he was going to be a “professional school shooter.” 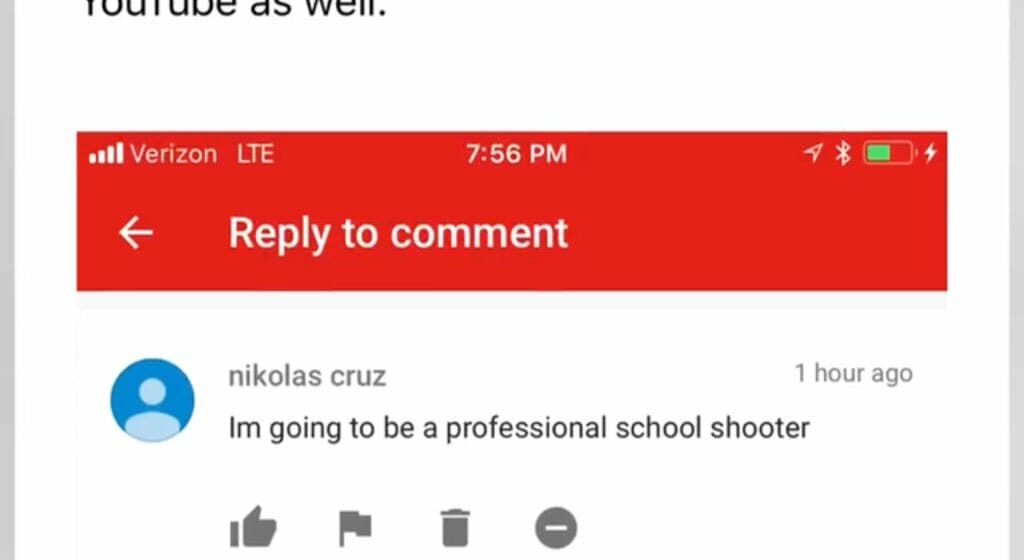 FBI chief Robert F. Lasky was asked about the YouTube threat by reporters…

The YouTube comment was posted by “Nikolas Cruz” – spelled with a ‘K”. The FBI says they did not know if it was the same person?

The Gateway Pundit concludes that “THIS IS A LIE…”

The threats were made in September.

Killer Nikolas Cruz ALSO used his real name on Instagram where his account is loaded with several photos of Cruz in a mask with a gun.

The FBI either ignored the threat or need better investigators.

What a fatuous and silly comment. I’m sure Wayne LaPierre and his evil minions sit around beers every night trying to figure out how many more “youths” they can put on psychotropic drugs so as to have more school shootings.

My solution: Arm teachers. More guns = less crime. You can look it up.

Firstly: A compliment to Suzanne Giraud. (Your response to my comment- appeared in my inbox. But it is not shown here!?!) And- hmmmm: About 4 years ago, I was invited to a ladyfriend’s home for supper. Her late teens daughter was there. The daughter, was not her usual effervesent sp self. She was very pale and quiet. I said to her: A part of you- is distant- it is not here- is something bothering you? Her Mummy replied: “Do not bother her- one of her best friends at school, just committed suicide. Her friend was only 18 years old.” So,… Read more »