Why is Hillary Clinton not adding “fake news” writer Paul Horner to the list of things to lame for her pathetic US election loss to Donald Trump?

According to Zerohedge, a self-described “fake news” writer has been found dead in Phoenix of an apparent “accidental overdose.”

Paul Horner often said that he felt “responsible for Trump’s election” because of how many of his fake news stories went viral over Facebook and Twitter but an immediate inconsistency arises when you realize the “Horner” doesn’t sound Russian at all.

While Horner may have felt guilt in his ability to craft viral news that he felt aided Trump, the writer failed to realize that if his stories had any effect in handing Hillary Clinton an election loss, then he did the United States, and the entire planet, a great service by preventing a woman who slaughtered hundreds of thousands of people in Libya, Syria and Iraq from entering the White House.

Horner, whose fake news stories often went viral on Facebook and Twitter, told The Intersect, a Washington Post blog, last year that Trump supporters were especially susceptible to being fooled.

“My sites were picked up by Trump supporters all the time,” Horner said. “I think Trump is in the White House because of me.”

“His followers don’t fact-check anything — they’ll post everything, believe anything. His campaign manager posted my story about a protester getting paid $3,500 as fact. Like, I made that up. I posted a fake ad on Craigslist.”

“I thought they’d fact-check it, and it’d make them look worse,” Horner said. “I mean, that’s how this always works: Someone posts something I write, then they find out it’s false, then they look like idiots.

“But Trump supporters — they just keep running with it! They never fact-check anything! Now he’s in the White House. Looking back, instead of hurting the campaign, I think I helped it. And that feels [bad].”

So what kind of “fake news” stories, written by Horner, were so powerful that they could sway an entire presidential election?  Well, as Wapo pointed out last November, this piece noting that the Amish community in America had thrown their full support behind Trump apparently went a long way toward accomplishing that goal.

Ironically, we don’t even recall Hillary ever blaming Horner for her loss…which is a disaster because she’s going to have to republish an edited version of “What Happened” now. 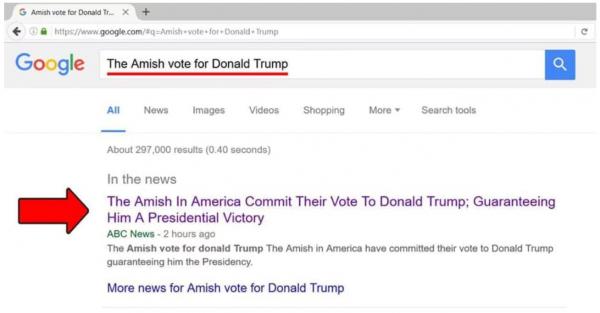 An OD of what exactly and what kind of drugsand meds does he have around the house? If the house is clean, be suspicious. Crunch the numbers on this to see if 2+2=5.

Quote: “Someone posts something, then they find out it’s false, then they look like idiots.”

He just described the entire MSM and DNC, except that he should have noticed – they never look like idiots to themselves and their advocates. That’s where he went wrong, a poor observer of the propaganda techniques of western media. (sometimes I read what I write and am aghast at the reality of it all).

Fought Hillary as hard as i could.
Trump is fast catching up with the ole cow, in how many innocent deaths he has presided over.
The ole cow did it as Secretary of State.
Trump is doing it from the pilot house of the ship of state.

he didnt help rig the primary against bernie sanders

What’s the bet that the news of the death of this controlled opposition puppet is also FAKE!