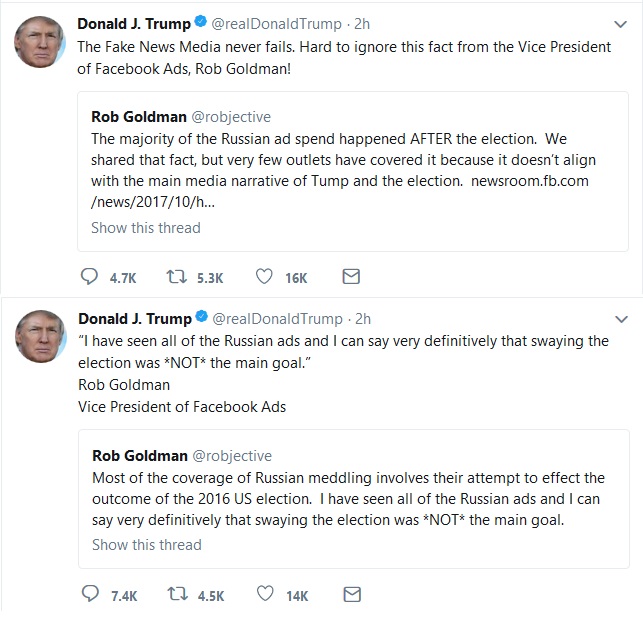 According to Wired, Rob Goldman quickly apologized for expressing “uncleared thoughts”…which were thoughts based on complete fact.

On Friday morning, just before 10am on the West Coast, the office of special counsel Robert Mueller published his indictment of 13 Russian operatives for interfering in the US election. The document was 37 pages, and it mentioned Facebook 35 times. It detailed how Russian operatives used the platform to push memes, plan rallies, create fake accounts, suppress the vote, foment racism, and more.

But then, roughly eight hours after the indictment appeared online, Rob Goldman, a VP for ads for Facebook, decided he had a few points to add to the debate. He was just freelancing, and had not cleared his thoughts with either Facebook’s communications team or its senior management.

With Mueller’s indictment, according to multiple people at the company, everyone felt that Facebook had done something right. The 35 mentions clearly showed that Facebook had fully cooperated with authorities. Many of the details in the indictment, particularly from pages 25 to 30, which include details of messages sent between private Facebook accounts, were given to Mueller by Facebook. That could have been a good story. But then Rob Goldman decided to weigh in, using a rival platform. He now has 10,500 Twitter followers, but a few fewer friends at work.

On Sunday night, Joel Kaplan, the VP of Global Public Policy at Facebook, put out a statement saying “Nothing we found contradicts the Special Counsel’s indictments. Any suggestion otherwise is wrong.” Roughly translated, that meant, “We asked Rob Goldman to throw his phone in a river.”

Later that day, Rob Goldman seemed to come to the same understanding, and posted internally at Facebook a message that read as follows: “I wanted to apologize for having tweeted my own view about Russian interference without having it reviewed by anyone internally. The tweets were my own personal view and not Facebook’s. I conveyed my view poorly. The Special Counsel has far more information about what happened [than] I do—so seeming to contradict his statements was a serious mistake on my part.

According to The Conservative Treehouse, one of the more hilarious and typically-left aspects to the sympathetic article about Rob Goldman’s wrong thinking comes from this paragraph…

Facebook has long had a vexed relationship with Donald Trump. It’s based in Silicon Valley, and most of the executives and employees are liberal Democrats. Mark Zuckerberg believes, to his core, that the point of his platform is to make the world more open and connected. Donald Trump’s campaign was built on tribalism—dividing America against the world, and dividing American groups against each other.

Via The Conservative Treehouse…

Remember, this is Facebook.  A social media platform based entirely on ‘tribalism’.

That paragraph is what’s called hypocrisy wrapped up with a heaping dose of sanctimonious pretzel logic.   In the same article where the author is describing an executive’s apology for having “unapproved wrong thoughts”, the same author is decrying Trump’s “tribalism”.

Seriously, you can’t make this stuff up.

The executives in charge of a social media platform based on western free expression and communication with “friends”, ie. ‘your tribe’, are now stating “thoughts” must be pre-approved and “tribalism” is bad, bad ju-ju…