It is the worst kept secret in politics…Facebook billionaire liberal left CEO, Mark Zuckerberg, is eyeing a White House run in 2020.

Since Trump’s election, Zuckerberg has shown an increased interest in politics, especially immigration…something dear to the heart of every globalist billionaire, working hard to keep massive income inequality in tact.

In a statement issued moments after AG Jeff Sessions rescinded Obama’s DACA Program, Facebook CEO Mark Zuckerberg said on his Facebook page that “It’s time for Congress to act to pass the bipartisan Dream Act or another legislative solution that gives Dreamers a pathway to citizenship.”

The CEO writes that while “no bill is perfect, inaction now is unacceptable” and adds that “the decision to end DACA is not just wrong. It is particularly cruel.”  Zuckerberg also writes that team FWD.us, which Zuckerberg is a member of, will do even more in the weeks ahead to make sure Dreamers have protections.

Some have speculated that this latest openly political statement, is Zuckerberg’s latest foray into the political arena, and perhaps a confirmation of recent rumors, that Zuck may be running for office in the coming years.

Comments on Zerohedge regarding the Facebook billionaire founder’s sadness for illegals not being allowed to stay in the United States on the dime of working class Americans, fell on very deaf ears… 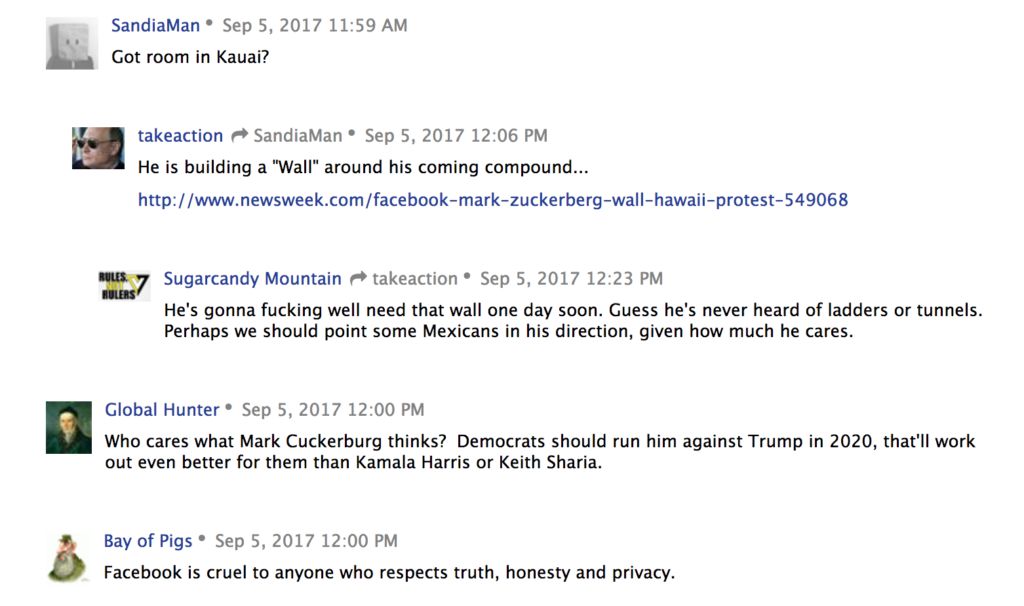 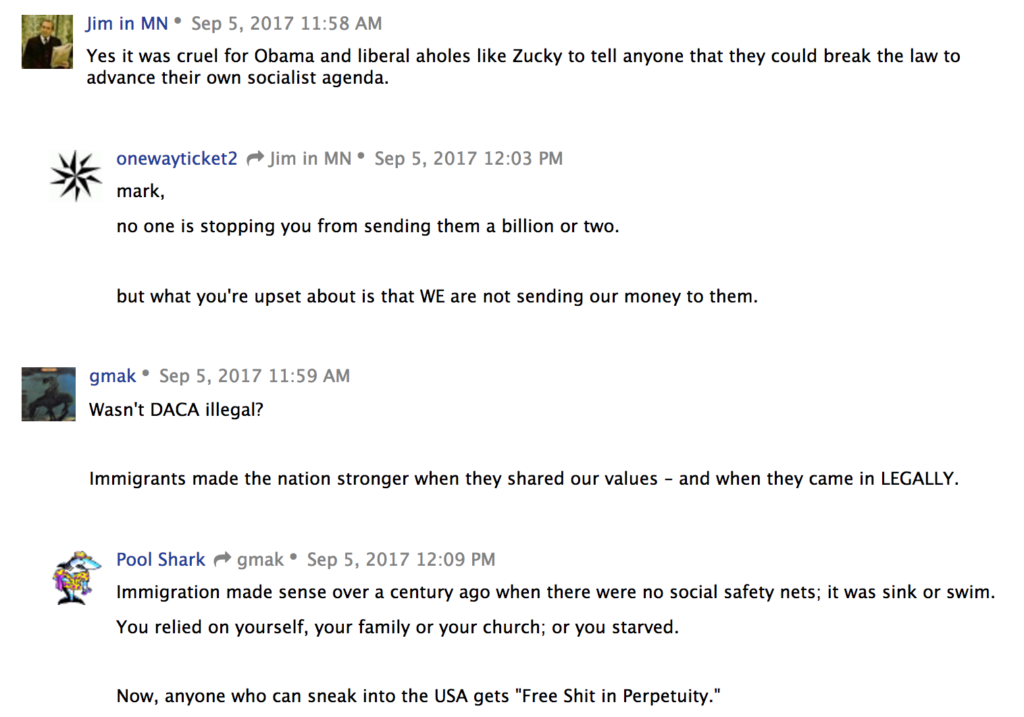 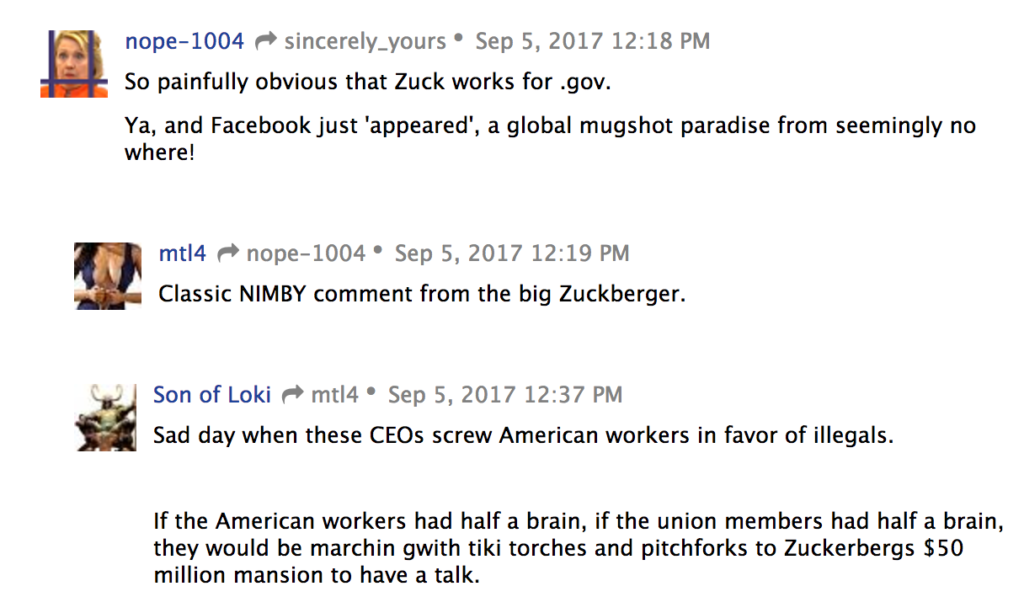 As one commenter summarized, for Zuckerberg and his presidential aspirations…“Yep…it’s all about the votes. Same as it ever was.”

This is a sad day for our country. The decision to end DACA is not just wrong. It is particularly cruel to offer young people the American Dream, encourage them to come out of the shadows and trust our government, and then punish them for it.

The young people covered by DACA are our friends and neighbors. They contribute to our communities and to the economy. I’ve gotten to know some Dreamers over the past few years, and I’ve always been impressed by their strength and sense of purpose. They don’t deserve to live in fear.

DACA protects 800,000 Dreamers — young people brought to this country by their parents. Six months from today, new DACA recipients will start to lose their ability to work legally and will risk immediate deportation every day.

It’s time for Congress to act to pass the bipartisan Dream Act or another legislative solution that gives Dreamers a pathway to citizenship. For years, leaders from both parties have been talking about protecting Dreamers. Now it’s time to back those words up with action. Show us that you can lead. No bill is perfect, but inaction now is unacceptable.

Our team at FWD.us has been working alongside Dreamers in this fight, and we’ll be doing even more in the weeks ahead to make sure Dreamers have the protections they deserve.

If you live in the US, call your members of Congress and tell them to do the right thing. We have always been a nation of immigrants, and immigrants have always made our nation stronger. You can learn more and get connected at Dreamers.FWD.us.

Zuckerberg is nothing except a tool.

If only that were true. He ain’t the bitch, he’s the pimp. Doesn’t make him any better though 🙂

Buy those votes Zucky , you’ll need them because everyone else is on to you !

messing with children is gross , zucky is probably just taking advantage of that fact

I suppose that’s why he put a huge fence around his Hawaiian property.

Who did see the inside of his jacket on YouTube? Says enough about his loyalty and plans.
https://youtu.be/ktfy79rkLEg?t=3m30s
Observe how uncomfortable he is when she unfolded the inside.

He is a strange animal. I enjoyed the cloning and shape shifting videos that followed this one. But President – surely not. He makes Macron look like a serious statesman, who won the French election with legitimate votes!

The American nutcases almost voted Hillary in. The US is lost so Zuck has every chance. Just pander to the weaklings of the society.

I got the impression, from here in Britain, that there were millions of illegal votes for Hillary, without even considering electronic vote tampering (of their own making, of course). So, rather like the French, I wouldn’t necessarily be too hard on the American voters. The US is lost though. Zuckerberg still makes Macron look impressive, I think.

On the other hand, she didn’t visit two states during her campaign! So it’s not that easy. Even then, this would mean still 64 million Americans would vote for her (if we scratch 1.5 million illegal votes) against 63 million whom voted for Trump. It’s not about the popular vote of course, but the point is made I think.

He is right that Congress should act … They can’t decide about immigration, they shirk any responsibility for the numerous wars we are fighting, they can’t decide how health care should be organized in this country. Exactly what are they doing, besides passing laws to make billionaires some extra cash?

Is this serious? He wants to run in politics?
Funny, because I was thinking that’s just what the US is lacking and needs in Congress/Administration – another rich Jew.
Oh….erm.

Like the US msm media gave tRump lots of publicity. The Duran now is giving the 2020 democorprat candidate the same?

Might be better to discuss the miscarriage that is the administration of repubelican bush the III and their “policies”. You know real issues. Guess they don’t work as clickbait.

This VERGA ZUCKER (Cock sucker) is a real Talmudic product, he is a puppet for pedo rabid rabbis

Three people’s photo which a raising the hairs in the back of my head are, Soros, Suckerberger & last but not least Billy Boy Gate !

Why is the Duran or anyone for that matter, giving this little POS, any air time at all? He’s a punk and everyone knows it. Stop propping this dinky-doo up, will you?