What business is it of a UN Ambassador to unmask American’s during a presidential campaign?

Is has already been reported and confirmed that Obama’s National Security Advisor, Susan Rice was involved in an unmasking scandal meant to undermine President Trump and his team.

Another top Obama official is now in deep trouble for unmasking American citizens. 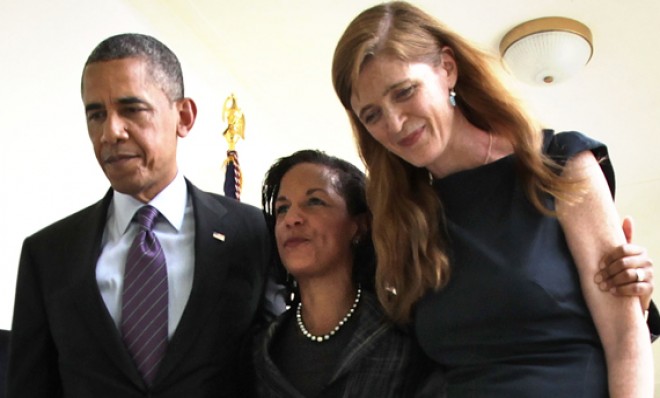 The Obama Administration’s deliberate targeting of a presidential candidate (Donald Trump) in order to aide a preferred presidential candidate (Hillary Clinton), is a massive scandal. No wonder the swamp is trying to resurrect the “Russia election meddling” fake news…its all about distracting the public’s attention away from the clear and proven election meddling committed by Obama staff, the FBI, NSA, and the entire DC swamp, to rig the election in Hillary Clinton’s favor.

Samantha Power, the former U.S. ambassador to the United Nations, was ‘unmasking’ at such a rapid pace in the final months of the Obama administration that she averaged more than one request for every working day in 2016 – and even sought information in the days leading up to President Trump’s inauguration, multiple sources close to the matter told Fox News.

Two sources, who were not authorized to speak on the record, said the requests to identify Americans whose names surfaced in foreign intelligence reporting, known as unmasking, exceeded 260 last year. One source indicated this occurred in the final days of the Obama White House.

The details emerged ahead of an expected appearance by Power next month on Capitol Hill. She is one of several Obama administration officials facing congressional scrutiny for their role in seeking the identities of Trump associates in intelligence reports – but the interest in her actions is particularly high.

well they failed, but were as useful as tRump is, in the evil US empire masthead “job”.

Useless for us, commoners of course.

Don’t forget that this harridan is married to Cass Sunstein,

Sunstein uses any Stasi like tactics for his “Boss”…

At least he’s not a Jew nor he has any connection to the AIPAC so we won’t go again accusing Israel of politically taking over the US… Oh wait !

Next time you write an article about Samantha Power please do not include her photos.

I swear she looks like a fucking Crack Whore.

You’re right. She really looks like a substance addict in crisis.

The logical question now is what the hell is the govt going to do about it. We have a steady drumbeat of news about which I consider felonies and silence from the govt. I know it takes time to put together an investigation and indictments but I do not see a focus. In my mind, as a start, I think sessions should step down and someone with a sense of pursuing felonies within the law installed. Please, not giuliani.