Pittsburgh Steelers head coach Mike Tomlin sponsored fundraisers for Hillary Clinton during the 2016 election, making his idea to keep his players in the locker room during the national anthem a completely politicized move.

Tomlin and his wife Kiya were very generous Democrat donors, hosting a fundraiser for then-Democrat presidential nominee Hillary Clinton in June of 2016.

Perhaps this is Tomlin’s way of payback for an investment in Hillary’s presidency gone bad. Or maybe Tomlin is just a sore loser, seeing his chosen candidate crushed in such spectacular fashion, that this was his one and only chance to try and stick it to US President Trump.

All this protesting by Hillary donors, coupled with Hillary’s nationwide book tour/Trump smear campaign is all to convenient. The Clinton mafia appears to be mobilizing their network of zombies to further destabilize Trump’s presidency.

The Hill reported on the June 14 fundraiser at Tomlin’s home in Pittsburgh, Pa.

The invitation has two contribution levels, including a “supporter” level at $10,000 per person and a “host” level of $33,400 per person that offers attendees a reception with the candidate.

Kiya Tomlin, a fashion designer, also donated $25,000 to the Obama Victory Fund in 2008 and made the maximum individual donation of $2,700 to Clinton’s campaign last summer.

According to The Gateway Pundit, Mike Tomlin and his wife are longtime Democrat fundraisers and donors. They donated a combined $70,000 to the Obama Victory Fund in 2012 among other donations to Hillary Clinton. 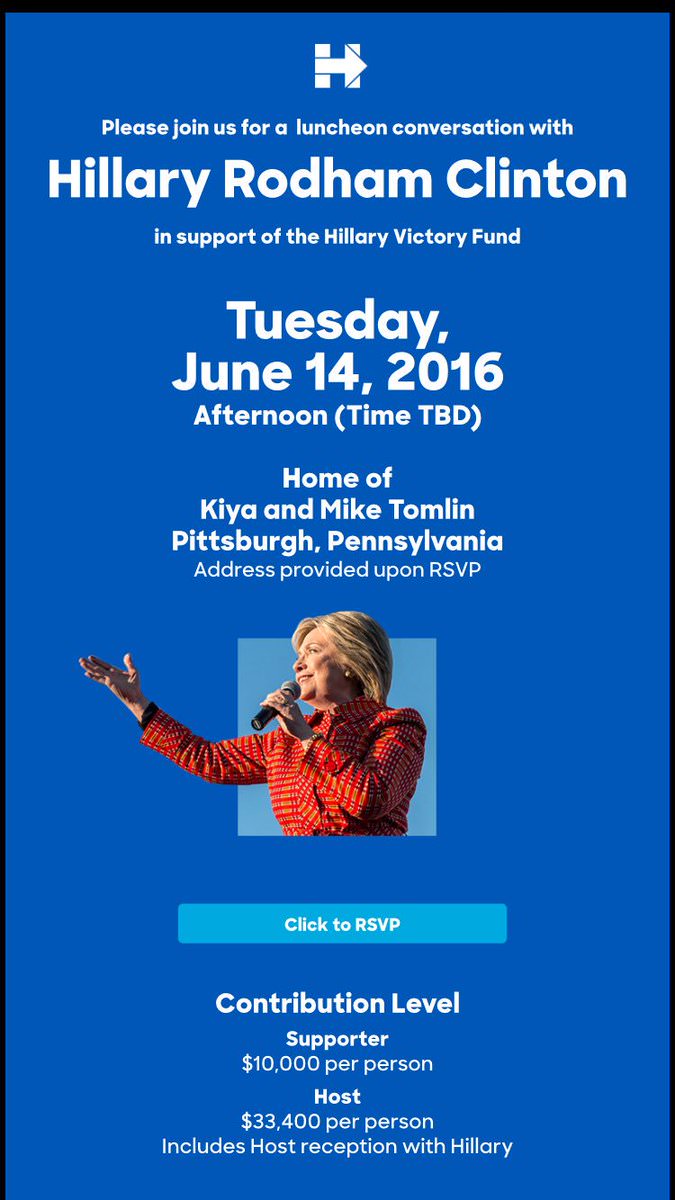 Former Army Ranger Alejandro Villanueva was the ONLY Steeler to come out for the National Anthem on Sunday. He stood in the tunnel while the rest of the team hid in the locker room like disrespectful cowards.

Pittsburgh Steelers head coach Mike Tomlin told reporters after the team lost on Sunday that he did not want Army Ranger veteran Alejandro Villanueva to stand for the national anthem.

And they want us to believe keeping the players in the locker room during the anthem was their way of staying out of making political statements? Pathetic.

Steelers head coach Mike Tomlin reveals to @JamieErdahl that the team will not be participating in today’s national anthem. pic.twitter.com/5zihPWQsMv

Players used to come out after the national anthem. You are being as over-the-top as those on the other side. Cool it.

Lost all respect for Tomlin (who calls out a West Point Grad, Army Ranger) for standing during the National Anthem? And for the Steelers, all the rings, HOFers, you just &%#! all over them. You hid in the bathroom while the only man on the team, Villenueva, had to hold up the entire franchise. Social, racial issues are not for the football field and the fans are letting the NFL know it.

Maybe your man wants his money back and is too shy to ask Killary?