Propaganda and demonization in the mainstream media takes on many forms.

Notice how the “M” horns are presented in these two similar, but very different TIME covers. 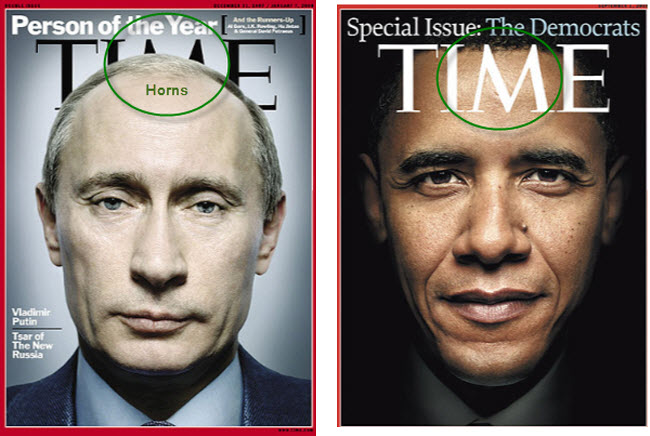 By subtly tweaking the color of the video, 60 Minutes made Steve Bannon look like a red-eyed drunk.

Conservative analyst and author, Ann Coulter, tweeted that these mainstream media tricks aren’t done on Fox News, and that is why conservatives look better on that channel.

GREAT VIDEO. Networks do this a lot. That’s why conservatives seem to look so much better on Fox News. https://t.co/jWmP5YcYxQ

“It seems like 60 minutes would like you to listen less and look more at Steve Bannon. By subtly tweaking the color of the video, they make him look like a bleary-eyed drunk. I show you how they did it,” writes Duke on the video’s YouTube page.

In the video, Duke explains how CBS color adjusted Bannon’s shots to make his eyes and lips red by increasing the level of saturation. This results in curtains that are a brighter orange behind Bannon than they are in Charlie Rose’s shot. Rose’s shot was made “cooler,” to make the host’s make-up more subtle.

The result is a natural looking Bannon.

DUKE: I wanted to talk a little bit today about color correction and grading, and how it can be used to make people look better or worse on television. This is a still frame of Steve Bannon from the 60 Minutes interview that’s going to run tonight. And the first things that I noticed was that there were red circles around his eyes and his lips looked cherry red. And I also noticed the curtains in the background looked really orange.

Now I’ve met Steve Bannon and I know what he looks like. He’s Irish and he does kinda have paper skin. But, he doesn’t have pronounced red circles around his eyes. That’s not who he is in real life. So I started comparing the two shots of Charlie Rose and Steve Bannon to see what kind of differences I could find, and it was very interesting. The first thing that you need to take a look at is the coloring saturation. Those drapes in the Breitbart Embassy are actually the same color. Now the light lighting them might be slightly closer or farther away, which accounts for the brightness, but they are the same color. And you can see from these two shots that they are defiantly not the same color.

If you take a look at Charlie Rose’s shirt, it’s about 13 unit of blue from neutral, which means that they’ve graded it into a cooler shot. That does a couple of things. It makes his make-up look less clownish and it also knocks down the contrast a little bit. So, I’m going to do the same thing to Steve. I’m going to make it a little bit bluer and I’m also going to lighten up the shadows a little bit. And Voila, the blood shot eyes are gone.

Now I’m going to do to Charlie what they did to Steve. I’m going to kick up the situation, the red, the orange, and i’m going to increase the contrast. So here are the two shots before and after, before and after. And here’s what the pictures would look like if they were graded similarly. Steve doesn’t have red circles under his eyes, Charlie’s make-up is subtle, can’t really tell he’s got it on, unless you’re looking. And Steve doesn’t look like the monster they want you to think that he is.

Focusing on probably the least significant detail of anything going on right now. Feels like this is the Trump defense network or something.

Focusing on or just sharing information? Why would you specifically want them not to make an article on it?

Alex keeps the site posted on some of the quibbles going on around the conservative wing of the US. I like these little bits of that underworld

Nevertheless, as a journalist & photographer, I see the difference and have used filtering to get a desired effect – witch/angel, saint/sinner, neat/scruffy, drunk/sober. The viewer who doesn’t know these effects is often fooled. Good work, sir.

I get it, I do graphic design work as well. I just saw multiple seemingly Trump defense team headlines today on Duran.

As someone commented on RT’s CrossTalk today, if you control images, you control people’s minds.

ALL of this sort of thing has been going on a long time, and it needs much closer scrutiny than it gets. Continous scrutiny and EXPOSURE. My own thought is that this fooling around with colors [and “horns”
on Putin for instance] is criminal subliminal advertising. It is very deeply ORWELLIAN and I think we should publicize and ridicule every instance of it. AND WE SHOULD SUE and BOYCOTT practitioners.