The Duran’s Alex Christoforou and Editor-in-Chief Alexander Mercouris discuss the continued rise of The Brexit Party, which now sees it’s polling numbers climb another six points in the past week, and polling higher than both Labour and The Conservatives, combined!

Nigel Farage’s new Brexit Party has surged again. After parting ways with the increasingly irrelevant UK Independence Party (UKIP), Farage’s newly branded “people’s army” is now polling above the Labour and Conservative parties put together ahead of the European Parliamentary elections at the end of May.

From humble beginnings in his small, creaking Westminster office, the Brexit Party has managed to command the attention of the electorate ahead of what is being billed as an effective “second referendum”: the EuroParl elections.

New data published by the Observer newspaper (the Guardian’s Sunday, sister paper) reveals the Brexit Party polling at 34 per cent of the vote. Up another six points in the past week. 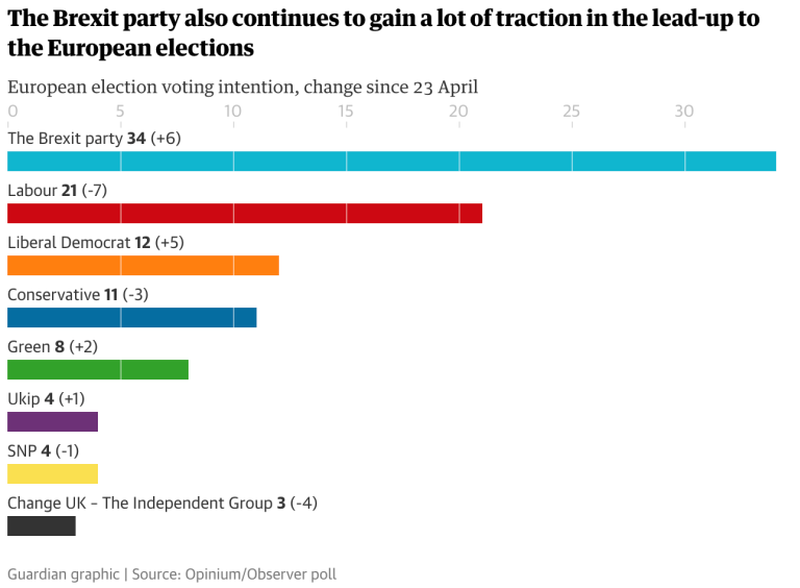 Westminster voting intention – if there were to be a domestic General Election soon – also spells major trouble for Theresa May’s so-called Conservative Party.

The Observer/Opinion poll shows Labour on 28 per cent, the Conservative Party on 22 per cent, and the Brexit Party on 21 per cent. 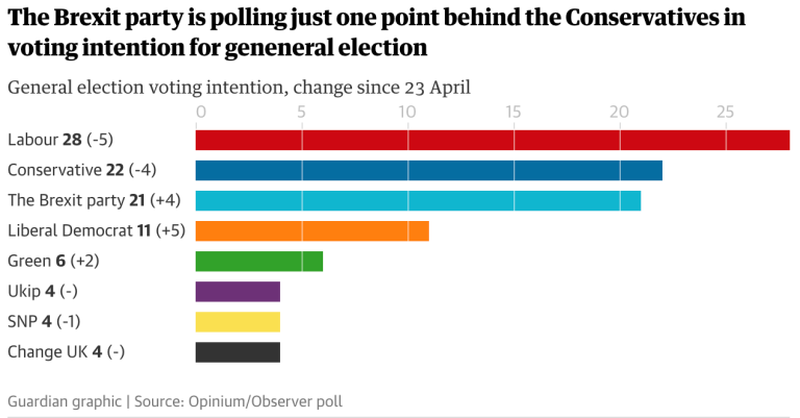 Farage has held over a dozen rallies and events in recent weeks, predominantly targeting working class voters who opted to Leave the European Union, but have traditionally supported the Labour Party.

The Labour Party’s position on Brexit is still unclear, given its leader Jeremy Corbyn’s historically opposition to the European Union, but most of the remainder of the party being in favor.

Farage and co have taken clear advantage of the cognitive dissonance emanating from Labour, and the sheer ineptitude of May’s Conservative Party.

The European elections will be held on May 23, with Human Events on the ground in London, reporting.

Looks like they’ll have to do some heavy election rigging…

And of course if the election result matches those polls, the “news” will be something along the lines of “A vast majority of people, 66%, voted against the neo-nazi fascist Brexit Party. This clearly shows that two thirds of the population want to remain in the EU. And it would have been far more if all the good anti-Brexit people had voted instead of staying home. This result clearly shows that the people at large do not want Brexit.”