The Duran reported last May, that former DNC chair Donna Brazile called police and the family of murdered DNC staffer Seth Rich and demanded to know why a private investigator was “snooping” into Seth Rich’s death.

Brazile was in panic mode after new revelations exposed that DNC Staffer Seth Rich passed on email documents to Wikileaks, and he may have paid the price for this leak with his life.

Brazile says she feared possible retribution from shadowy elements within the campaign and the Democratic Party who might blame her for the leak. Her fears only intensified, she says, after the mysterious shooting of former campaign staffer Seth Rich, who the authorities said was killed during a robbery, though many so-called conspiracy theorists have speculated about a possible Democratic plot to kill Rich for his role in leaking the stash of DNC emails to Wikileaks. Brazile’s anxiety eventually spiraled out of control, to the point where she feared for her own life while serving as interim chairwoman of the DNC.

Newly released excerpts from Donna Brazile’s book “Hacks: The Inside Story of the Break-ins and Breakdowns That Put Donald Trump in the White House,” reveals the Democrat operative was haunted by the mysterious death of DNC staffer Seth Rich.

Drudge says Brazile was so paranoid about snipers shooting her dead that she made a habit of shutting the blinds.

“Brazile writes she was haunted by murder of DNC Seth Rich, and feared for her own life, shutting the blinds so snipers could not see her,” tweeted Drudge on Saturday afternoon. 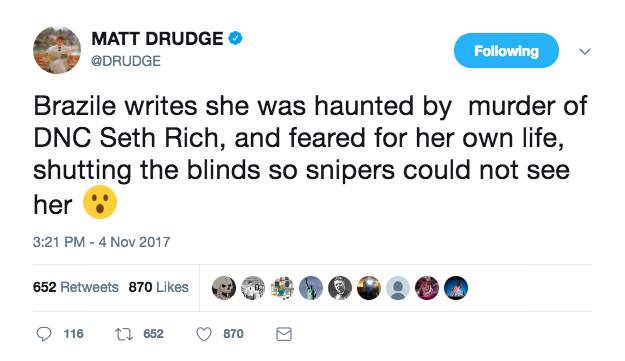 “Brazile writes that she was haunted by the still-unsolved murder of DNC data staffer Seth Rich and feared for her own life, shutting the blinds to her office window so snipers could not see her and installing surveillance cameras at her home.”