Turkey’s Sultan Erdogan shows why he may very well be the most dangerous and unstable leader on the world stage, doing something that no demagogue dictator in the history of mankind has been filmed doing…making a little girl cry on stage during a speech by telling her she will be “martyred.”

Zerohedge reports that in what has been slammed as a bizarre act of propaganda, Turkey’s president Recep Tayyip Erdogan sparked online outrage when during a public address urging the nation to prepare for mobilization, he invited a small girl in military uniform onstage and promised the sobbing child she would receive state honors if she is killed.

While addressing a provincial congress of the ruling AKP party, the Turkish leader used the occasion to whip up public support for the ongoing military operation targeting Kurdish militias in Syria, and remind those who have completed their service but still had “active mobilization orders” to be ready to be recruited again if the situation requires.

As he was speaking, a young girl who was present at the congress and was dressed in military uniform complete with a maroon beret worn by the Turkish Special Operations Forces, caught Erdogan’s attention, according to TV footage of the speech. He invited the young child to come to the stage next to him, BBC reported. She did so reluctantly, at which point she burst out sobbing.

Erdogan told the crying, scared little child, as quoted by the Daily Mail…

“She has a Turkish flag in her pocket too.”

“If she is martyred, they will lay a flag on her, God willing.”

Erdogan then stated, “she is ready for everything, isn’t she?”

The Turkish sultan made the bizarre comments on live television, in front of cheering supporters who urged him to carry on with the military offensive against Kurdish fighters in Syria’s northern Afrin.

Creepy Erdogan then kissed the girl and let her go. 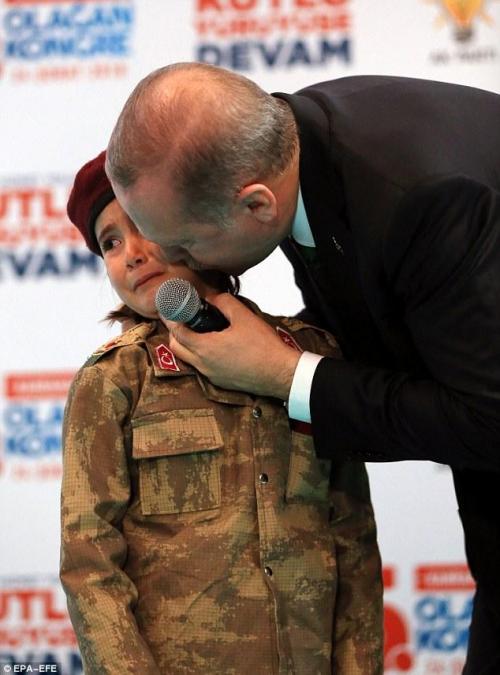 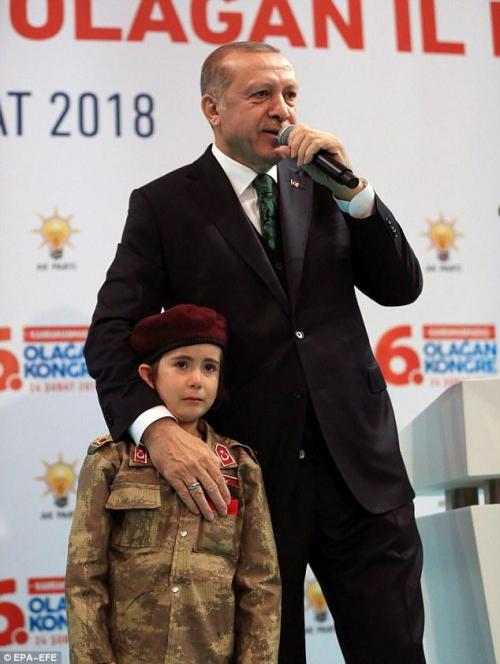 The president’s comments were immediately condemned on twitter – one person likened them to child abuse while another sad the president was wrong to says ‘God willing’ to the death of a child. Other critics said this was the same sort of child abuse for propaganda purposes as carried out by Islamic State fighters.

The pro-Kurdish Peoples’ Democratic Party which opposes Ankara’s operation in the Afrin region, slammed Erdogan’s act: “The mindset that abuses children by promising them death will lose. We will win the struggle for the children’s free and happy life!” the party said in a Twitter post.

Erdogan’s latest comments have however hardly dampened the enthusiasm of his supporters for his Syria offensive, nor do they appear particularly concerned that Erdogan’s own sons have evaded military service while he routinely emphasizes the importance of martydom as a means of securing Turkey’s future.

In January, Turkey launched a major military operation to oust YPG Kurdish forces from their enclave of the northwestern town of Afrin. Erdogan earlier this month said troops would also move east to Manbij – where unlike Afrin there is a US military presence. Commentators say such a move would mark a major escalation in the conflict.