Infowars and The Alex Jones Channel has amassed over 1.5 billion views in its 10 year existence.

Fake news CNN has seen its ratings plummet year over year, with people tuning out to much of the mainstream media propaganda, for which CNN has mastered.

All of this has led to many of the old media networks like CNN, colluding with Silicon Valley platforms, so as to stop the rise of alternative news sources.

Infowars is a favorite in the conservative movement with a massive following.

And CNN wants them gone!

CNN is openly lobbying to have a competing news network banned.

CNN is openly lobbying to have a competing news network banned.

Last week, CNN published a front page story entitled InfoWars is two strikes away from being banned from YouTube in which the news organization deliberately misrepresented our content in relation to the Parkland school shooting as part of an effort to pressure YouTube to delete our channel.

This morning, we were informed that the channel had received a second strike on a video relating to the Parkland shooting, meaning it is now on the verge of being terminated permanently.

The videos in question did not claim the school shooting didn’t happen or that the victims were “actors,” as CNN has falsely misrepresented. The videos questioned if some of the prominent students who are now publicly leading a nationwide campaign for gun control were being coached on what to say.

The ability to question the statements of public figures on television is part of basic free expression under the First Amendment, and does not constitute “bullying” or “harassment,” as YouTube claims.

By lobbying to have one of its competitors shut down, CNN is engaging in tortious interference, which is when one party damages another’s contractual or business relationships with a third party, causing economic harm.

CNN is also engaging in fraud by misrepresenting our content to demonize Infowars as somehow being responsible for the tragedy. The true content of the banned videos can be viewed here.

YouTube is engaging in discrimination against Infowars because of our political views.

Infowars will not hesitate to pursue all legal avenues to protect our interests.

From a wider perspective, this is insidious. A news network is devoting resources to lobby for another news network to be censored. 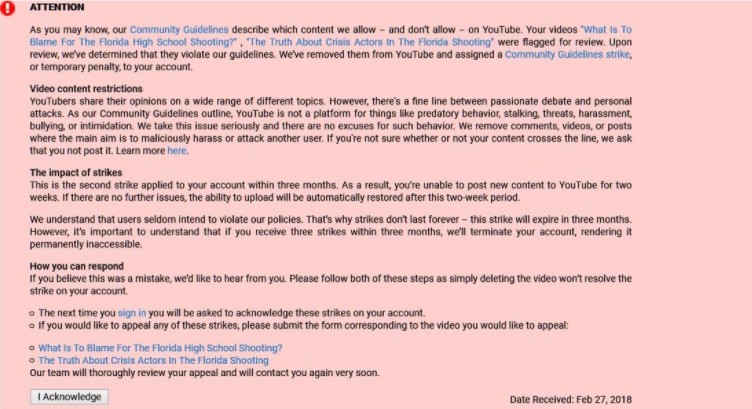