Former DNC chair, Donna Brazile, who helped Hillary cheat her way to the presidential election, turned on the Clinton mafia as excerpts from Brazile’s upcoming book claim that Hillary rigged the Democrat primary against Bernie Sanders.

In her attempt to sell her upcoming book, former DNC Chair Donna Brazile snitched on the Clinton mafia in a stunning revelation that the DNC fixed the primaries against Bernie Sanders while Hillary money laundered DNC funds from local elections straight into her pocket.

The latest excerpt from Brazile’s book from WaPo details how horrified Donna and others in the DNC were about Hillary’s non-stop coughing fits and ill health.

Hillary was so sick that Brazile and others discussed replacing her with VP Joe Biden as the Democrat nominee after Hillary fainted and was rushed into a black van.

Not leaving this latest Brazile revelation go unanswered, the Clinton mafia has issued a statement, and its goes something like “Russia, Russia, Russia.”

Hillary’s camp is furious with Brazile and lashed out at her over the grim picture she painted of Hillary’s health and campaign.

In an open letter signed by 100 of Hillary’s former senior aides, Brazile’s account of Hillary’s ill health was fueled by Russian propaganda.

“We were shocked to learn the news that Donna Brazile actively considered overturning the will of the Democratic voters by attempting to replace Hillary Clinton and Tim Kaine as the Democratic Presidential and Vice Presidential nominees. “It is particularly troubling and puzzling that she would seemingly buy into false Russian-fueled propaganda, spread by both the Russians and our opponent, about our candidate’s health.” 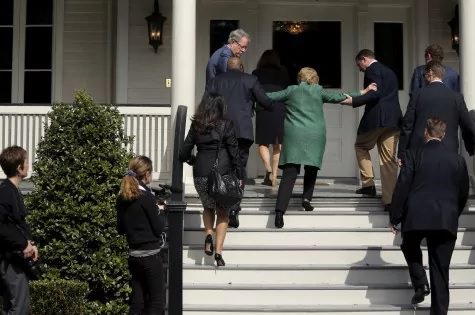