The Atlantic published private messages between Wikileaks and Trump Jr. under the headline and excerpt…

“The Secret Correspondence Between Donald Trump Jr. and WikiLeaks”

The transparency organization asked the president’s son for his cooperation—in sharing its work, in contesting the results of the election, and in arranging for Julian Assange to be Australia’s ambassador to the United States.

The Atlantic notes that, “The messages, obtained by The Atlantic, were also turned over by Trump Jr.’s lawyers to congressional investigators.”

How do we know Congress leaked Trump Jr. and WikiLeaks’ DMs?

“The messages, obtained by The Atlantic, were also turned over by Trump Jr.’s lawyers to congressional investigators,” the magazine says.

Leaked transcripts of private messages between Donald Trump Jr. and WikiLeaks appears to show Twitter, the Democrats and the mainstream media have all teamed up in an attempt to kick up more Russia collusion hysteria.

The Atlantic piece states “Though Trump Jr. mostly ignored the frequent messages from Wikileaks, he at times appears to have acted on its requests.”

The magazine’s “big bombshell,” admits Trump Jr. cared little about what WikiLeaks had to say and then goes on to speculate that he acted on their advice. Newsflash — WikiLeaks’ ‘Podesta Email Series’ helped to expose Clinton’s corrupt ways. Disseminating information derived from the emails does not mean Trump Jr. acted on the organization’s advice. Rather, Trump Jr. was doing what any person would do with verifiable damning information — Get it out there. That’s What Trump Jr. did with WikiLeaks emails and articles from other publications, as well.

The messages, obtained by The Atlantic, were also turned over by Trump Jr.’s lawyers to congressional investigators. They are part of a long—and largely one-sided—correspondence between Wikileaks and the president’s son that continued until at least July 2017. The messages show Wikileaks, a radical transparency organization that the American intelligence community believes was chosen by the Russian government to disseminate the information it had hacked, actively soliciting Trump Jr.’s cooperation. Wikileaks made a series of increasingly bold requests, including asking for Trump’s tax returns, urging the Trump campaign on Election Day to reject the results of the election as rigged, and requesting that the president-elect tell Australia to appoint Julian Assange ambassador to the United States.

“Already did that earlier today,” Trump Jr. responded an hour-and-a-half later. “It’s amazing what she can get away with.”

“Hey Don. We have an unusual idea,” Wikileaks wrote on October 21, 2016. “Leak us one or more of your father’s tax returns.” Wikileaks then laid out three reasons why this would benefit both the Trumps and Wikileaks. One, The New York Times had already published a fragment of Trump’s tax returns on October 1; two, the rest could come out any time “through the most biased source (e.g. NYT/MSNBC).”

It is the third reason, though, Wikileaks wrote, that “is the real kicker.” “If we publish them it will dramatically improve the perception of our impartiality,” Wikileaks explained. “That means that the vast amount of stuff that we are publishing on Clinton will have much higher impact, because it won’t be perceived as coming from a ‘pro-Trump’ ‘pro-Russia’ source.” It then provided an email address and link where the Trump campaign could send the tax returns, and adds, “The same for any other negative stuff (documents, recordings) that you think has a decent chance of coming out. Let us put it out.”

Trump Jr. did not respond to this message.

In October, Julian Assange tweeted US Senator Feinstein’s letter to Twitter CEO Jack Dorsey, demanding he hand over the Direct Messages from the @Wikileaks Twitter account.

“Senator Dianne Feinstein demands @jack hand over @WikiLeaks and my personal Twitter Direct Messages. Feinstein has been calling for my prosecution since 2010 over our publications.”

Senator Dianne Feinstein demands @jack hand over @WikiLeaks and my personal Twitter Direct Messages. Feinstein has been calling for my prosecution since 2010 over our publications. https://t.co/4TcDw0UjUf pic.twitter.com/Pw9R6BbIMk

The ranking member of the US Senate Judiciary Committee is seeking information “not routinely shared with Congress.”

Senator Dianne Feinstein (D-California) has written to the Twitter CEO asking for documents related to “all ads and organic content posted by Russia-connected users and targeted to any part of the United States, regardless of whether the individual or entity violated any Twitter policy.”

Feinstein also listed 14 other categories of information in her request to Twitter CEO Jack Dorsey, including any information on the hacker Guccifer, in the letter dated October 27. 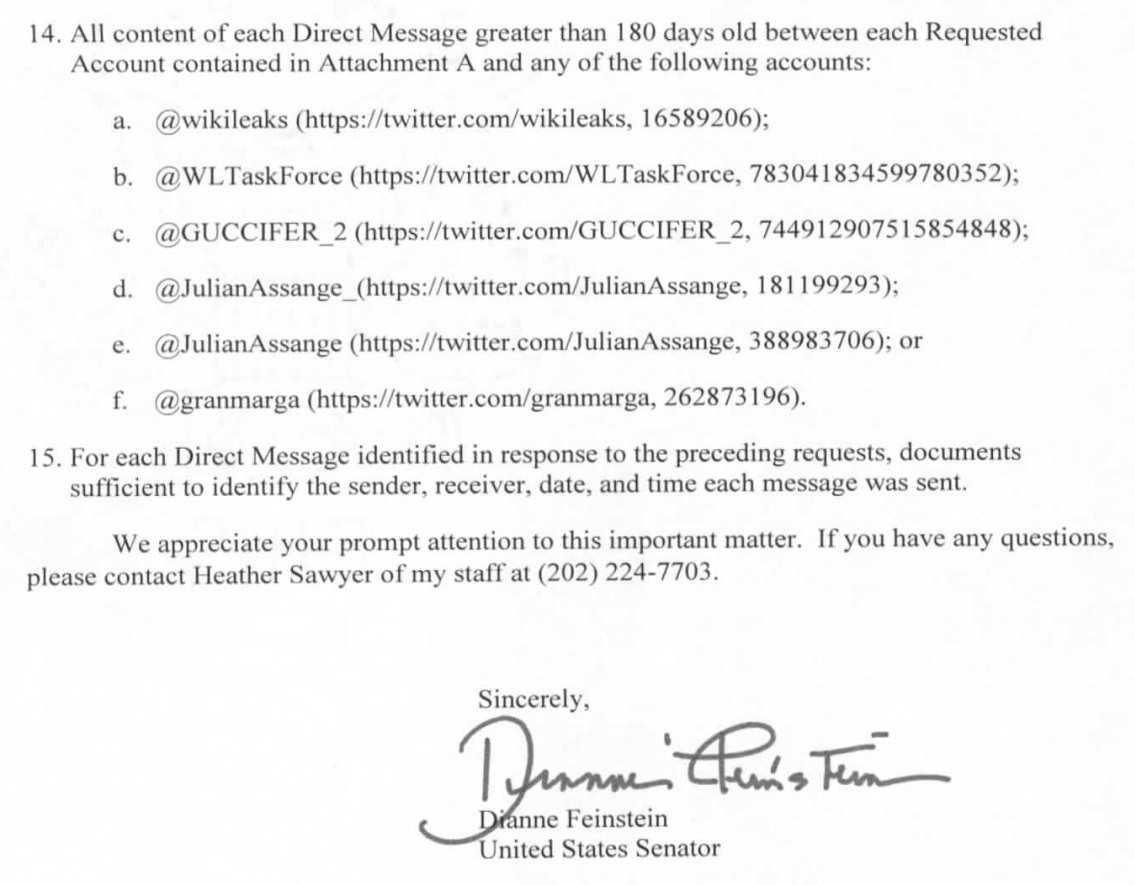