Syria has confirmed that the US led coalition whose very presence in Syria is illegal according to international law, has recently dropped white phosphorus munitions over a village in Deir ez-Zor.

Similar to the infamous napalm munitions the US used in the war on Vietnam, white phosphorus melts the skin off human bones, resulting in  an excruciatingly torturous death.

SANA reports that thus far three civilians have been killed while another five have been seriously injured.

“The news comes a day after a report that coalition airstrikes left nine civilians dead in the northeastern province Hasaka. Those killed included an Iraqi family of six that had escaped Daesh violence in Mosul, according to SANA. Citing sources, the agency added that the coalition had also launched airstrikes on the villages Hadaj, Huneidis and Hassan Ali near the Iraqi border, which has resulted in “huge material damage”.

The coalitions airstrikes have resulted in death of hundreds of people in Syria. On August 4, the coalition admitted that “at least 624 civilians have been unintentionally killed by Coalition strikes since the start of Operation Inherent Resolve” against Daesh in Iraq and Syria in 2014″.

The forensic and field images shown below, demonstrate what happens to human bodies after they are hit by white phosphorus 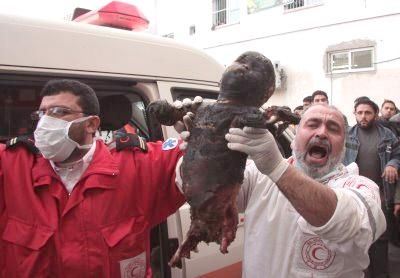 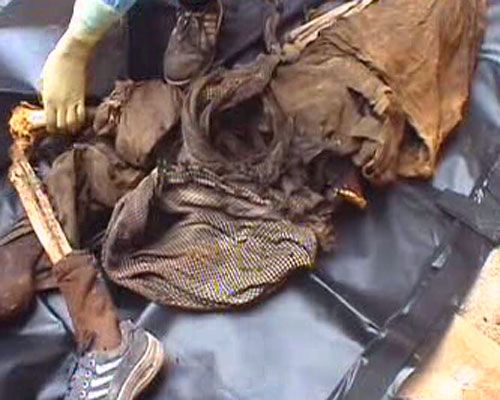 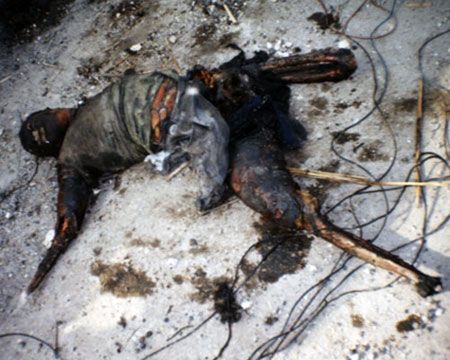 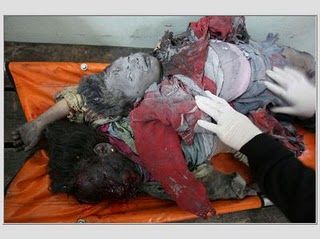 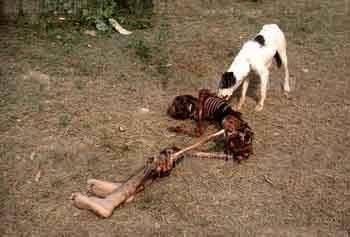 White phosphorus is highly noticeable when being dropped from war planes as it leaves a distinctive set of white vapour trails when dropped.

The US has previously used white phosphorus in Raqqa, Syria as well as in Mosul, Iraq.

The current Ukrainian regime in Kiev has also used the banned munitions on civilian populations.

So, I wonder if bush the III has rushed into mad dog’s office and done his routine about beautiful babies? The evil US empire just can’t help itself!

The baby shown in the photograph above isn’t very beautiful. Hey, thanks a bunch, Uncle Sam!

Again, this will never, ever be shown in the western MSM, never, because Norwegians air force, the one that bombed Libya most of the “coalition” forces, burned children alive an mass and Norwegians dont give an rats ass about this anyway. Yeah, Muslims terrorists anyway, right Yankikes. Nobody cares, not an single one, thru all this years I have never seen this kind of images on the Tube, have you, apart from some cuts from ww2 or maybe Vietnam. Phosphor, like Magnesium alloys, need Ox to burn, and if you get that on your body, it will burn even better,… Read more »

“European economic and societal collapse by the year of 2028”: https://thesaker.is/pentago…
“On the European Continent, hidden from the common ear and eye, clandestine warfare against European citizens is planned by – the German Bundeswehr, NATO and other European armed forces. They are preparing for subjugating possible social upheavals, if necessary killing their own citizens,,,,” : https://thesaker.is/germany…
The US has already brought war to Europe: http://global-politics.eu/2017/08/26/kosovos-path-secular-nation-europes-jihadist-stronghold/

Google is paying 97$ per hour,with weekly payouts.You can also avail this.
On tuesday I got a brand new Land Rover Range Rover from having earned $11752 this last four weeks..with-out any doubt it’s the most-comfortable job I have ever done .. It sounds unbelievable but you wont forgive yourself if you don’t check it
!si297:
➽➽
➽➽;➽➽ http://GoogleDailyNewsFirstUpdateWorkFromHome/find/jobs… ★✫★★✫★✫★★✫★✫★★✫★✫★★✫★✫★★✫★✫★★✫★✫★★✫★✫★★✫★✫★★✫★✫★★✫★✫:::::!sc187..,….

I’m truly sorry for these lives lost to the genocidal US fascist regime acting out of desperation due to their humiliating defeat in Syria, but this is also a reason why Russia should extend the NFZ to cover all of it, minus (for now) the “kurdish” (they constitutes less than 50%) areas.

Get this out to all Alt- Press and YT, Brietbart and sources like Minds.com and Vid Me (plague the censors and inform the enlightened). US Mustn’t be allow to forget this, and the world needs to condemn it. Everytime the US show hypocracy, remind them of their past.

Stop complaining and start retaliating by shooting down the invaders. Syria has a responsibility towards its’ citizens to protect them and its’ territory.

They can’t retaliate. Retaliation is what the U.$. wants. They WANT the excuse to directly kill Syrian soldiers. The U.$. WANTS the justification for ‘defending their interests’ in someone else’s country. The reason the U.$. is doing this is to TRY and start a direct confrontation. The courts are the only way to address this. A stitched up International Court system. DOCUMENT DOCUMENT DOCUMENT DOCUMENT! Everything must be DOCUMENTED. Plaster it all over the net. Send these articles to your friends. Get everyone to notice what is being done. And ASK your local member of parliament what is the LEGAL… Read more »

Exactly. The US and Israel want a confrontation as they wish to subjugate Syria and control the narrative.
With patience the US is being exposed a bit more every day and Israel is even now generally despised by many hundreds of millions around the globe.

A cornered rat is more dangerous

Folks, let us not forget that America is an ‘exceptional’ country which can bomb and gas its way anywhere in the world, with impunity.

Yes.. You’re damned right..! Those Americunts..! And yes I’ve never seen all these in YouTube… not to mention in the western MSM presstitute either..! I’m shocked to know what that thing can do..!!! I used to hear about it but have never seen any of the victim/s of these depleted fuxking stuffs or to what extent of damages can be done..! Some kinda war should be and must be brought to the Yankee land of Americu(n)..! So, what is The Useless so called World body will do about these..? Nothing..! All of their paychecks came from these Murders Mafia of… Read more »

Those pictures, times that by a million and a half. Thats the number of victims of US criminality over the past 20 years alone

Used quite liberally by the Empire has been depleted uranium also… and with monstrous consequences on humanity’s genetic material, e.g. in Iraq, in Yugoslavia, in Afghanistan, in Palestine, etc. The imperial bully and its despicable accomplices in Palestine will only learn when they are served the heaviest load ever of their own “medicine” at home… and many times over for good measure. Then, and then only will some form of basic sanity necessarily appear in the Empire. To repeat, the time for bear and panda hugging is over. This is total war on the world in the making by the… Read more »

Are you related to Peter Lavelle?

Is that the talk in your Israel basement….blame it all on “Muricans”?

Like Israel in their Operation Cast Lead: white phosphorus and blowing civilians to smithereens in Gaza. Disgusting war criminals!

The horrible depravity of the war is promoted by inhuman criminals.

A good read on the subject posted by PCR.

What has Ivanka got to say about monstrosity of her father and his generals? Or is her pity only for ISIS and Al Queda terrorists?

She’s a good Jewish mom….and they are not Jewish….just animals to the princess.

Then fuck the Jooz too..!

Hard to think of what could be more evil and monstrous.

The US has indeed become a truly disgusting country.

Is this how Democracy, Free Trade and Happiness looks like?
AIPAC US INC. government must be brought before the Courts as warcriminals.
Plus all their handlers, as well. We must find a way to be able to stop this world conquering game by AIPAC Government in DC.

It is my sincere wish that the US be visited with everything it is doing to everybody else.

Just waiting for the day when there are UN Inspectors in an area and they get incinerated by some amerikan white phos., then we will get to watch the UN grovel before the US war criminals insistence that the aircraft that dropped the munitions and had amerikan markings were actually Russian aircraft painted to look like amerikan aircraft. Rachel Madcow will have a field day on MSDNCia!

What’s with the photo of a dog eating a corpse on a green lawn? It does not look right. It looks like some old horror movie stock. Why is the lawn not scorched? Why are we still using stock photos to “illustrate” real events? Looks dodgy, even if it is legit. Over the top. The first photo would have been fine by itself if it is made clear that it was not from the actual event. Don’t use the same tactics as the main stream media. Sensational editorial decisions.

Very well said – an ‘outrage’ article with no facts or substance to it, which will ultimately only detract from efforts for accountability.

And please know that i am NOT someone who would defend the illegal use of white phosphorus, as my firsthand report from Afghanistan demonstrates i think. VERY poor effort by the duran staff in my opinion.