From collusion to obstruction, to the latest talking point (which will provide a final off-ramp for Democrats, Republicans, Trump, the FBI, and the Deep State)…“Russia sowing discord in America’s democracy.”

The entire indictment is as stupid as can be.

Thirteen Russian guys out of St. Petersburg posted mean stuff about Hillary Clinton on Facebook and this has been hailed as solid proof that Russia meddled in the US political process.

13 guys and 3 entities equates to all of “Russia.”

“Russia meddles everywhere” and “Russia sows discord”, are now the new talking points all over the US mainstream media.

Russia bad, America’s democracy pure, and it’s time for all Americans to unite and fight the real enemy…RUSSIA.

And of course all the media “experts” that have zero knowledge of anything related to Russia, somehow know for certain that these 13 guys and 3 entities are connected to Putin…because everyone in Russia “doing naughty things” is connected to Putin. Keep in mind that Rosenstein never once said entities indicted have any connection to the Russian state.

Let’s not forget that the all-star election meddler on the planet is the United States, by a wide margin. 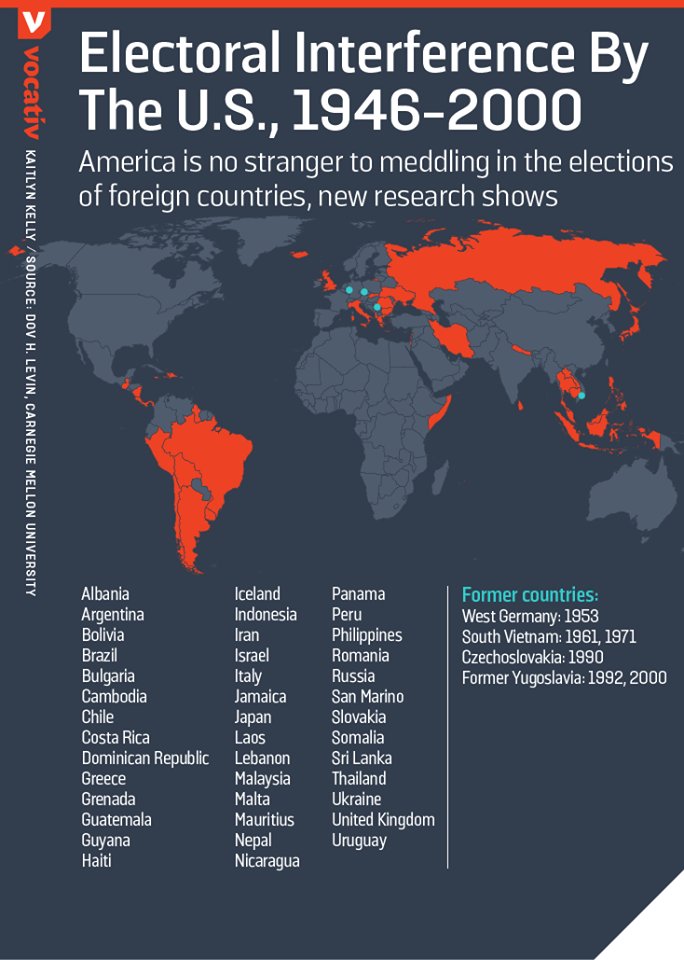 The way the entire Mueller debacle and Deep State corruption (exposed for all the world to see), will be washed away and conveniently forgotten, will be by blaming it all on Russia, and all on Putin.

MSNBC, CNN, and all mainstream media got the same memo, and will soon join with Fox News to scapegoat the last year and half of lies onto Russia.

Rosenstein paved the way for the final act, in what has been a tragic comedy…blame Russia.

The US wants war as in Vietnam Iraq Libya Ukraine Syria and in Korea Iran China Russia Yemen They must sell weapons and this needs wars and rumours of wars.Nothing new under the American Congress sun. Signs of the End of the Age:- “””Matthew 24: 5For many will come in My name, claiming, ‘I am the Christ,’ and will deceive many. 6You will hear of wars and rumors of wars, but see to it that you are not alarmed. These things must happen, but the end is still to come. 7Nation will rise against nation, and kingdom against kingdom. There… Read more »