Presidential elections in Belarus were held on August 9. According to the results, the incumbent head of state Alexander Lukashenkа gained 80.08 percent of the vote, Svetlana Tikhanovskaya was supported by 10.09 percent.

It was absolutely clear that Lukashenkа would win the elections because of the wide support of the people.

By the way, mass unauthorized protests are taking place in Minsk and other Belarusian cities all the week after elections.

Let’s note that all protests are very organized and are very like events of 2014 in Kiev.

Considering the fact that it was Poland that called for an urgent EU summit to discuss the situation in Belarus, it is safe to say that Western countries are involved in the riots. Moreover, the leaders of the opposition left the country and moved to neighboring Lithuania.

In other words, these actions are planned and prepared by Western countries, including the United States, to destabilize the internal situation in Belarus.

At the same time, Western states declare that the elections in the Republic of Belarus are illegitimate. The West is not going to give way and will continue to influence events in Belarus. To do this, all tools are used: the media, telegram channels, political support for the opposition and protesters through statements in the media, financial support and preparation for riots.

The fact is that Germany and the United States want to cut off Russia from Europe. If Belarus, as a union state, is lost for Russia, then the Kaliningrad region will be isolated and surrounded by NATO member states. This gives the alliance indisputable advantages in case of a possible military conflict with Moscow.

That‘s why the leader of Belarus must use all the tools in order to preserve the country and prevent chaos and civil war.

It is obvious that the West will not let go of Belarus. They want to use Minsk for their geopolitical purposes under the guise of democratic principles and ideas. The only way out for Belarusians is a union state of Russia and Belarus.

governments installed by the western Anglosphere on the basis of carefully selected riot footage is now the basis of modern democracy.

All these opposition candidates are fleeing Belarus, and guess where they are going? Lithuania, Ukraine and Poland. So now we see who the string pullers are. All the worms are coming out of the woodwork. We know who they work for, and what their agenda is.

…we know dear!…what the locals consider patriots you label them as traitors!…has your boss does – all the political opposition is accused of corruption and imprisoned (when they are not killed)!…it’s because of that lack of respect regarding the others and because of the absence of the rule of law that the Belarus people wants to get rid of Lukashenko…and after that Russians will get rid of Putin…it’s all a question of time…

…or due to the miserable living standards in Belarus?…6.000 usd of anual income per capita !!!…probably Belarus population don’t want to live like that for ever !!!…

Calling a spade a spade
Reply to  jpthiran

Sure, they want to live like Ukrainians and suffer even further. LOL

The Mice that Roared
Reply to  Calling a spade a spade

Ah, but the dreams, my friend. The dreams of manna from the EU heaven and to gain a privileged place in the EU surely by 2040, and to tear those subsidies away from the French farmers and become the EU’s breadbasket. Nothing can replace dreams, my friend. But first, NATO must be sure there’s no hanky panky afoot. LOL

That is as high a living standard as in Poland with $12’000! Poland pays EU prices, Belarus pays Russian prices. In Russian suburbs it is possible to live with Rubel500 a month including a car, a house and heat in the winter. How well people live depends on the cost of living, not just on the dollar number per capita.

The Mice that Logic Ignored
Reply to  Regula

You know, Pompeo’s a sneaky fellow. Once NS2 is shut down, he plans to send Yarosh to blow up Ukraine’s gas line to the EU as he’s threatened so often, shutting off next to all Russian gas to Europe, all with the intent to sell that high priced frac gas to them.

I mean, otherwise – without shutting down Ukraine transit, why would anyone bother to buy US LNG?

With Russia’s help, Belarus is doing just fine. The West can get lost.

Russia will help. Besides, Belarus already has a currency union with Russia.

Calling a spade a spade

Don’t kid yourselves. Belarus is on fire because ‘Batya’ finagled the elections. Certain organs of the West are just throwing fuel on it, as is their parasitic habit.

Simple Geopolitical Realities
Reply to  Calling a spade a spade

If the EU would own up to the fact that it’s being used as a vehicle for the NATO parasite to gain territory, and then change its behavior for the better, as was abundantly clear when NATO set its sights on Crimea, then maybe the EU’s meddling wouldn’t cause so much consternation and push back within its neighbors.

Glocken-spiel
Reply to  Calling a spade a spade

What elections or anti-EU referendums are not finagled and thrown by the
NATO globohomos? UK, Italy, Greece, Turkey? NATO armed coups have taken place against Afghanistan, Iran, Iraq, Syria and the Rep. of Georgia.

The Mice that Logic Ignored
Reply to  Glocken-spiel

I beg your pardon. Bolivia is the shining example of how NATO affiliates habitually intervene to guarantee honest and free elections.

Even I made myself laugh over that sentence.

Regula
Reply to  Calling a spade a spade

Lukashenko has finagled the elections since time immemorial. But the fact remains that he has his people on his side due to the good economy. Those who protest now are a small minority puffed up by the west as if they were the suppressed majority – just as in Hong Kong, where a minority was made to look as if they were all the people of Hong Kong and only a small minority wanted to be Chinese. In reality in both places such secessionist movements are false, introduced by US subversion. Now that China made an end to such subversion… Read more »

President Lukashenko held a speech in front of 65.000 supporters in Minsk. He promised to save and protect Belarus from foreign interference.

But it’s interesting how RT seem to be covering these protests sympathetically. Is this significant? I wonder if Russia also doesn’t mind if a man they consider a loose cannon, is tipped overboard? Putin may see Lukashenko as another Erdogan, who has been just as unreliable and indeed troublesome hostile since Russia tipped him off about the American organised coup. However, Lukashenko seems a tough nut and may well hang on to power if he really has enough domestic support. I don’t see Russia being rash enough to get directly involved.

TASS does not cover these protests sympathetically. TASS is closer to the Russian Government than RT. I have always wondered about RT, it seems to be undermined with foreign agents (CIA).

It is evident that the protests in Belarus are not spontaneous. There is obviously a lot of money behind it, sent by western secret services. This is not a revolution, but an attempted coup.

Where did these “revolutionaries” actually come from? Have they grown on trees in the past month? The opposition has neither public organizations nor long-term headquarters. These are greedy, stupid people who were given dollars and euros to strike and protest. The money comes from the west.

The Mice that Logic Ignored
Reply to  Olivia Kroth

President Lukashenko is speaking to a crowd of followers and thanks them for their votes and support:

BELARUSIAN FOLK TALE OF THE TIMID GREY MOUSE AND BLARING SHEEP The broad pattern of what is happening in Belarus right now was anticipated months in advance. Long before the election, foreign secret services got busy sending money to instigators to create artificial “unrest” as a pretext for a coup.  President Alexander Lukashenko was supposed to be eliminated in a sweeping coup and be replaced by a naive newcomer, a brain-damaged former Chernobyl child. Since there were no serious challengers to be found, this simpleton girl would do. That she disappeared so fast to Lithuania shows her qualities of a… Read more »

STARS AND STRIPES: Lukashenko claimed Sunday that NATO forces were 15 minutes from Belarus’ western borders with Poland and Lithuania. “NATO troops are at our gates. Lithuania, Latvia, Poland and … Ukraine are ordering us to hold new elections,” he told supporters at a rally in the capital city of Minsk, according to Reuters news agency.  He warned Belarusians that their country would “die as a state” if new polls were held, Reuters also reported. Results show Lukashenko won 80.1% of the vote while opposition candidate Sviatlana Tsikhanouskaya garnered 10.1%. Tsikhanouskaya was detained for seven hours after lodging a complaint over… Read more » 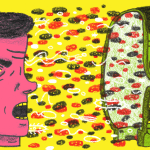 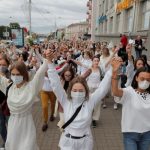 Posting....
wpDiscuz
29
0
Would love your thoughts, please comment.x
()
x
| Reply
Send this to a friend