The sneaky thing about Amazon’s increased dominance in so many key aspects of our lives is that much of the perniciousness is hidden. No one’s going to tell you about all the retailers who have gotten pressured or destroyed via its tactics while you’re happily clicking “add to cart” and smiling about 2-day free shipping. In this sense, it can be best compared to the evils of factory farming. Most people just simply have no idea about the immense damage going on behind the scenes as they indulge in incredible convenience and what looks like a good deal.

– From my November 15, 2017 post: Amazon Poses a Serious Threat to Freedom and Free Markets

Today’s post should be seen as an update to last year’s article referenced above. In the months that have followed, I’ve been consistently frustrated by the lack of interest when it comes to the dangers presented by Amazon and its richest man in the world ($165 billion as of last count) CEO Jeff Bezos. The following Twitter exchange is a good example of what I mean:

Sure it does. Bezos is on a board advising the Pentagon and Amazon has a $600 million contract with the CIA. You're a smart guy, I'm sure you know this. https://t.co/kUNs2yXMsG

I’m not trying to pick on Bill here. He’s been a reader of my work for some time, and I consider him an intelligent person who genuinely cares about having a positive impact on the world around him . This is precisely why this sort of thing is so frustrating to me. There seems to be a gigantic society-wide disconnect between people’s perception of Amazon and the reality.

Rampant ignorance has plagued the U.S. population when it comes to the deployment of technology, which has allowed the platform monopolies of Facebook, Google and Amazon to rise to dominance with disturbingly little scrutiny. Specifically, these companies have been able to take advantage of a massive knowledge arbitrage between themselves and their users. In other words, these companies have been so far ahead of the general public when it comes to technology, they were able to create incredibly profitable surveillance companies without anybody noticing or caring until very recently.

It took over ten years since the founding of Facebook (and the election of Donald Trump) for people to even pretend to care on a meaningful level. As I noted in the post, The Only Reason We’re Examining Facebook’s Sleazy Behavior Is Because Trump Won:

Trust me, there’s nobody more thrilled to see Facebook’s unethical and abusive practices finally getting the attention they deserve from mass media and members of the public who simply didn’t want to hear about it previously. I’ve written multiple articles over the years warning people about the platform (links at the end), but these mostly fell on deaf ears.

That’s just the way things go. All sorts of horrible behaviors can continue for a very long time before the corporate media and general public come around to caring. You typically need some sort of external event to change mass psychology. In this case, that event was Trump winning the election.

The more I read about the recent Facebook scandal, it’s clear this sort of thing’s been going on for a very long time. The major difference is this time the data mining was used by campaign consultants of the person who wasn’t supposed to win. Donald Trump.

As Stacy Mitchell noted in her excellent article, Amazon Doesn’t Just Want to Dominate the Market—It Wants to Become the Market:

By the fall of 2016, the share of online shoppers bypassing search engines and heading straight to Amazon had grown to 55 percent.

Since many people start and end with Amazon’s portal for all their online shopping, it is through this narrow experience that public perceptions of the company are formed and it’s almost impossible to imagine online shopping without it. But the reality of the situation is Amazon is far more than a retail shopping website — it has extensive and growing ties to the military-industrial-survelliance complex.

It’s important to have this sort information at your fingertips the next time someone describes Amazon in warm and fuzzy terms, so here are few examples:

1. Amazon Web Services (AWS) has a major financial relationship with the CIA.

A 2017 article in Business Insider summarized some of what’s going on: 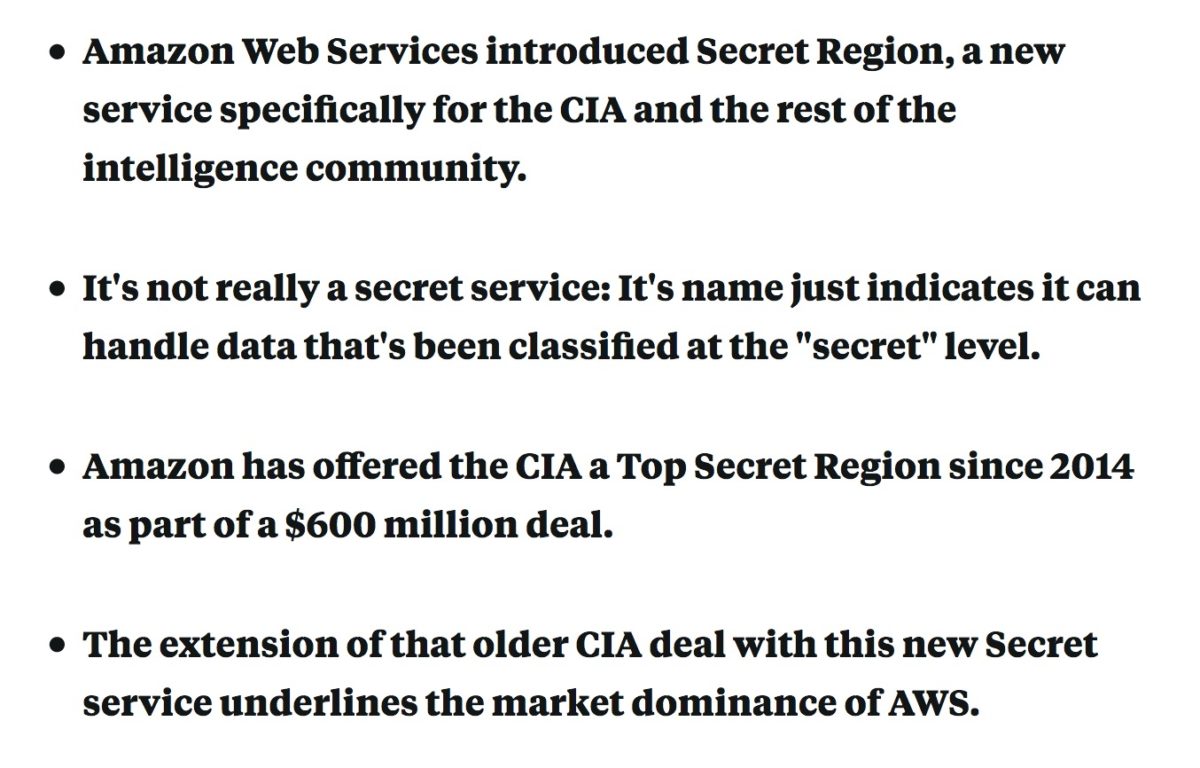 2. Jeff Bezos was named to the Pentagon’s Defense Innovation Advisory Board back in 2016.

3. Vanity Fair recently reported on how Amazon and its lobbyists have seemingly rigged the process of awarding a $10 billion Pentagon contract in favor of the company.

“We recently became aware of serious and possible criminal violations related to the Amazon cloud DOD contract process,” says a high-ranking congressional staffer who spoke on the condition of anonymity. “We are concerned about the implications of the appearance of conflicts of interest and impropriety related to how Pentagon personnel with close ties to Amazon may have influenced multi-billion-dollar cloud contracts.”

4. Amazon is selling a creepy and dangerous facial recognition product known as “Rekognition” to police departments across the country (see the following from the ACLU: Amazon Teams Up With Government to Deploy Dangerous New Facial Recognition Technology).

Given the clear links between Amazon and the surveillance state, am I the only one who finds it mind-boggling that so many people are willing to place an Amazon created “virtual assistant” named Alexa into their homes and treat it as part of the family?

Those are just a few points highlighting Amazon’s deep ties to the military-surveillance state, and we haven’t even discussed its perverse impact on competition in the free market for goods. As Stacy Mitchell notes:

Amazon has also used below-cost selling to crush and absorb upstart competitors. In 2009, it acquired the popular shoe retailer Zappos after reportedly losing $150 million selling shoes below cost in order to force the rival company to the altar. Likewise, when Quidsi, the firm behind Diapers.com, emerged as a vigorous competitor, Amazon offered to buy it; when Quidsi’s founders refused, Amazon slashed its diaper prices below cost. Bleeding red ink, Quidsi eventually agreed to Amazon’s offer. Over time, this behavior has had a restraining effect: Start-ups intent on challenging Amazon are unlikely to find investors and so never get off the ground. “When you are small, someone else that is bigger can always come along and take away what you have,” Bezos has said.

Many Americans have started to recognize the dangers of Facebook and Google over the past year, partly as a result of the companies’ increasingly sloppy use of censorship, yet the public remains in complete denial when it comes to Amazon and Jeff Bezos. I suspect this will change in the years ahead, and I hope my articles on the topic will serve as useful resources for those who care. The sooner we admit what’s going on the better.

As Amazon stock surges toward a $1 trillion market cap, I strongly suggest everyone listen to this discussion.

Bezos wants to use it to control and dominate significant aspects of the U.S. economy. https://t.co/46HRNjIgKZ

Never even gave Amazon a thought…the very way they are set up…is worse than the fast food franchises employee wise…put it this way…an old friend went to a teller in his bank branch to withdraw some funds…and she told him “Sir, you could use the ATM” and he replied if I and everyone else did as you requested you would NOT have a job!!!!

Jeff Bezos – a friend of the CIA. We should all boycott Amazon!