On Saturday, Democratic members of the House Intelligence Committee released their rebuttal to the Nunes memo.

The counter-memo claims that the “FBI and DOJ officials did not ‘abuse’ the Foreign Intelligence Surveillance Act (FISA) process, omit material information, or subvert this vital tool to spy on the Trump campaign.”

The memo refutes claims that the Steele dossier was the central source for securing FISA warrants and that other sources were used to secure warrants to effectively spy on Trump campaign staffers…sources that are completely redacted within the Schiff memo.

Not surprisingly, the most relevant part of the Democrat countermemo has been redacted: the discussion of “multiple independent sources” that “corroborated Steele’s reporting”, presumably more than just CNN, WaPo and NYT, who were allegedly hand fed leaked material straight from the DOJ, NSA, and FBI (via Strzok, Page and others). 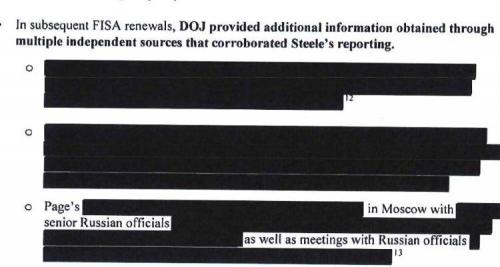 Here is Devin Nunes speaking on the released Schiff Memo at CPAC 2018.

Some more details: as part of “correcting the record”, the HPSCI democrats claim that:

Adam Schiff’s counter memo claims that Steele first shared his findings with the FBI in October 2017, a timeline that does not fit in with previous reports citing that Steel first began communicating with the FBI in June 2017. Via Zerohedge…

“Furthermore, as some have pointed out the Schiff memo states Steele began to share with an FBI agent through the end of October & played no role in the FISA warrant. This is wrong, because as previously disclosed, Steele first contacted FBI in July and later gave more info in August.”

The first report in the dossier compiled by former MI6 agent Christopher Steele was dated June 20, 2016.

Steele told the left-leaning publication Mother Jones that he took the first part of his dossier to the FBI “near the start of July.”

James Comey, when he was FBI director, told members of the House Intelligence Committee the Trump-Russia investigation began “in late July.”

So the timeline is: The first dossier report was June 20, Steele approached the FBI near the start of July, and the FBI began its investigation in late July.

Finally Schiff’s memo fails to address Andrew McCabe’s stunning testimony before the House Intelligence Committee which stated that the Steele dossier was the main driver for issuing FISA warrants.

Via The Washington Examiner…

“Deputy Director McCabe testified before the Committee in December 2017 that no surveillance warrant would have been sought from the FISC without the Steele dossier information,” a controversial memo composed by Rep. Devin Nunes’ staff claims in regard to the secret Foreign Intelligence Surveillance Court. The memo was released Friday.